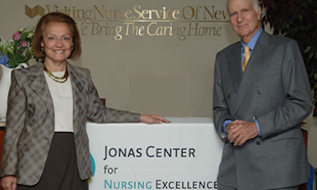 Having just moved into their New York apartment, Barbara and Donald Jonas found themselves staring at a blank canvas. “About thirty years ago, we had moved into a lovely apartment with a lot of walls and we wanted to do something together,” says Barbara. “[My husband and I] thought that [investing in art] would be a very interesting way to share a project. We would learn about art. We would go to museums. We would talk to dealers. We would speak to curators. And so we immersed ourselves in the project together.”

Over the years, Donald Jonas, co-founder and former chairman of the retail chain Lechters, and Barbara Jonas, former practicing psychotherapist and social worker, slowly amassed a collection that included some of the biggest names in postwar and contemporary art: de Kooning, Rothko, Gorky, and Kline. Art collecting represented many things for the Jonases–a passion, an intellectual pursuit, an investment opportunity, and a unifying project the entire family could take part in and enjoy. It’s no surprise, then, that giving it all away would be all those things as well.

In 2005, the Jonases auctioned off an impressive collection of abstract paintings, donating the proceeds to the new Barbara and Donald Jonas Family Fund, a donor-advised fund at New York’s Jewish Communal Fund. Donald recalls, “We decided that we wanted to do some things in our lifetime, especially for New York City where we have lived our whole lives. If you die rich, you die poor really. You have an obligation to do things while you can. We had every reason to do this sale.” It was a sale that yielded more than $40 million for charity, one of 2005′s most generous donations.

Again, the Jonases were staring at a blank canvas, an arena in which their personal values, intellectual curiosity, and business and investment sense could come together to do something for their beloved city. The Jonases deliberately looked for “an uncrowded beach” where their grants could make a difference, and they found it in the field of nursing, what Donald declares is “the most undervalued profession.” He contends, “There’s nothing more important than nursing when one goes into a hospital…The nurses are the key to the whole health system.” He is quick to point out that there could be a shortage of as many as one million nurses by 2020. An increasingly diverse and aging society will need confident and capable nurses, and the field currently lacks both diversity and nurses specializing in geriatric care. The crisis is particularly acute in the Jonases’ New York, which has the lowest nurse-to-patient ratio among the nation’s leading cities.

Barbara and Donald Jonas convened two groups–one composed of hospital administrators and heads of schools of nursing and another composed of health care funders. “We did a lot of homework,” Barbara states. “We felt very strongly that we were on to something really quite important.” “Money doesn’t go to nursing,” Donald adds.

Shortly before National Nurses Week in May 2006, the Jonases created the Jonas Center for Nursing Excellence, “a first-of-its-kind philanthropic program dedicated to tackling the toughest issues facing the profession in New York City,” and announced their first grants. The Center seeks “to advance professional nursing through programs that promote nurse recruitment and retention, increase racial and ethnic diversity among the nursing workforce, advance innovative practice models and improve practice environments.” The Center announced grants of $150,000 to $400,000, encouraging hospitals and other practice sites to pair with nursing schools to foster continued collaboration. “We had an interesting concept,” Barbara explains. “We thought that rather than just asking for proposals for possible grants, we set aside a few requisites. We said that we wanted any agency who applied for money to partner with another agency.”

In November 2006, the Jonas Center hosted a symposium, “Who Will Care for Me? Strategies and Initiatives to Address the Nursing Crisis in New York City and Beyond,” bringing together leaders in health care, business, government, philanthropy, and media to discuss the problems facing the nursing profession and the state of health care in general: rising costs, pressure from insurers, managed care models, difficult work environments, unsafe patient-nurse ratios, a lack of diversity, and diminished professional satisfaction, among others. Donald affirms, “Barbara and I want to galvanize every possible sector… to take an active role in remedying the system’s ills and establishing a model for change that can be replicated nationwide.” By encouraging collaboration and convening stakeholders, the Jonases hope to create a whole community of “champions” for nurses.

2007 brings two more initiatives for the Jonas Family Fund–one in the area of mental health and another working with disadvantaged youth, two more causes of great interest to the family. Barbara is a former psychotherapist and social worker and founder of the Barbara Jonas Centers for the Study and Treatment of Children at Risk at Columbia Presbyterian and New York University School of Medicine. Barbara and Donald’s grand-daughter, currently living in Oakland, California, works in the public school system and brought to the fund an interest in funding mentorship programs and other efforts for disadvantaged youth. Barbara notes, “Donald and I never had this kind of funding before, but we’ve always been active members of the community.”

Married for more than fifty years, the Jonases have two children and two grandchildren. Noting how money can sometimes divide families, the Jonases looked to their wealth and their philanthropy as “a rallying point, a unifying force for [the] family.” The family meets several times a year with the family’s philanthropy consultants at Rockefeller Philanthropy Advisors. The children have discretionary grant power, allowing them to pursue their individual charitable interests–everything from youth programs to animal rights advocacy–in addition to the family’s philanthropic programs. Donald says, “[It’s about] giving them a feeling of what it is to give.” Barbara asserts, “You have to get everyone on board. Everybody has to have some input.”