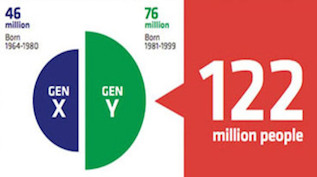 Editor’s Note: This month’s issue of Family Giving News features an overview of the results of the exciting new study conducted by our colleagues at the Johnson Center for Philanthropy and 21/64. To download the full report, please go to www.nextgendonors.org. Please note that the Next Gen Study is copyrighted, and that any reprint or use of the material from the Next Gen Donors study is prohibited without the express approval of 21/64 and the Johnson Center for Philanthropy.

Who are the Next Gen?

The next generations of major philanthropists, those who fit into “Gen X” (born 1964-1980) or “Gen Y/Millennial” (born 1981-2000) generational cohorts, will have tremendous influence on the direction of and support for efforts to improve local communities and solve global problems over the next several decades. (NOTE: We use the term “Millennials” throughout the study for ease of reference, but the name for that generation is still in flux.)

Corporations want to know how to hire and supervise these next generation members, parents want to know how to engage them, and everyone – nonprofit and for-profit – wants to know how to attract their dollars. However, we have not heard much from these high-capacity next gen donors themselves, outside of a couple of interviews with Forbes magazine or the occasional conference presentation.

Considering how much of our future is in their hands, we have set out to understand how next gen major donors think about philanthropy, what and how they want to learn about it, and how and with whom they want to be engaged. We need to know even more, and we hope this report offers a good starting place.

So, who are the next gen major donors of today and tomorrow? While there certainly are entitled, wealthy kids out there, we have discovered many people, mostly inheritors and some earners, who are serious and responsible, who work hard to educate and prepare themselves because they know they are poised to become the most philanthropic donors in history.

While they are not necessarily more charitably-minded than members of previous generations, the sheer volume of funds, foundations, and other giving among people from high-net-worth families is expanding to unprecedented levels. And the Gen X and Millennial members of those families stand to become the decision-makers for those unprecedented resources over the next several decades.

Even with the recent economic downturn, the trend of the last several decades toward increasing wealth concentration among the highest net-worth families in the United States has continued.

Scholars calculate that the U.S. is currently undergoing a massive “wealth transfer” process, as historic amounts of accumulated assets pass from one generation to another. Scholars project that at least $41 trillion will transfer as bequests to the post-Baby Boom generations over the first half of the 21st century. This large amount of wealth, along with assets passed to descendants through pre-bequest transfers and the amount of new wealth being created, has led some observers to predict a new “golden age of philanthropy” (Havens and Schervish, 1999) as much of this wealth becomes available for charitable purposes.

More money and more diverse ways to engage can grow and change philanthropy in ways we have not seen since the advent of modern philanthropy in the time of John D. Rockefeller and Andrew Carnegie. These major donors during the earlier golden age of philanthropic expansion and innovation focused on creating enduring institutions such as universities, libraries, and foundations, and devising “scientific philanthropy” techniques to guide their decisions.

What will the major donors of our current era of significant philanthropic change look like? What kind of philanthropists will they be or become?

This research seeks to understand who these next gen donors are and how they think. It aims to:

This report is based on first-of-its kind data, listening to members of the next generations of major donors, ages 21 to 40, in their own voices. A national online survey (310 total responses) and in-depth interviews (30 total) have revealed the following key findings:

Who Influences Next Gen Donors?

1. Driven by Values, Not Valuables: Because these next gen donors come from families with wealth and philanthropic resources, they are members of generations experiencing rapid social changes, and they are currently in important developmental stages of their lives, many readers may expect them to be entitled by privilege, careless with legacy, and eager for change. However, we have discovered  quite the opposite. Values drive these next gen major donors, not valuables – values they often say they have learned from parents and grandparents. They are mindful of the privilege they have inherited or that comes with the wealth they are creating. They seek a balance between honoring family legacy and assessing the needs and tools of the day. They fund many of the same causes that their families support and even give locally, so long as that philanthropy fits with their personal values. They give using many of the same methods that their families use, but they want to explore new philanthropic and investing tools as well. They are eager to share in lifting the mantle of responsibility, along with other members of their families, and to put their resources to work for social good. Yet while they feel a commitment to philanthropy that comes from the past, they plan to meet that commitment in somewhat different ways in the future. Most of all, they are ready to be donors – and all that the term entails – now.

2. Impact First: The word “strategic” is used – probably over-used – in many different ways in the field of philanthropy these days. But these next gen major donors highlight the importance of strategy for the future of the field. They see philanthropic “strategy” as the major distinguishing factor between themselves and previous generations. They intend to change how decisions are made and how research and due diligence are conducted, utilizing multiple sources for information and all of the “tools in the toolbox,” as one of them describes it. They see previous generations as more motivated by a desire for recognition or social requirements, while they see themselves as focused on impact, first and foremost. They want impact they can see, and they want to know that their own involvement has contributed to that impact. They want to use any necessary strategies, assets, and tools – new or old – for greater impact.

What Influences Next Gen Donors

3. Time, Talent, Treasure, and Ties: Once engaged, these next gen major donors want to go “all in.” Giving without significant, hands-on engagement feels to them like a hollow investment with little assurance of impact. They want to develop close relationships with the organizations or causes they support; they want to listen and offer their own professional or personal talents, all in order to solve problems together with those whom they support. They have grown up volunteering, and they still want to offer their time, but in more meaningful ways, not just holding a seat on a gala organizing committee. Like other Gen Xers and Millennials, these next gen donors are highly networked with their peers. They learn about causes and strategies from their peer networks and enjoy sharing their own knowledge and experiences with their peers. They believe that collaborating with peers makes them all better donors, and extends their impact. Put simply, they want to give their full range of their assets – their treasure, of course, but also their time, their talents, and even their ties, encouraging others to give their own time, talent, treasure, and ties.

4. Crafting Their Philanthropic Identities: As much as they discuss what and how they think about philanthropy and what they definitely want to do when they take over, these next gen major donors are still figuring out who they will be as donors.

Many are in their twenties, experiencing a move from adolescence to emerging adulthood, and developing a sense of self. All are from high-capacity families, where wealth does not always transfer easily to the next generation, and where many adolescents come of age feeling like children waiting to inherit independence on many levels. And lastly, events and conditions specific to these historical generations have left lasting impressions that must affect how they act as donors.

How do you craft a philanthropic identity amid these three forces? Mostly, these donors say, through personal experience. They learn most from seeing and doing, or even hearing from others about their own authentic experiences of seeing and doing. Rather than waiting until the sunset of their lives to decide who they are as philanthropists and what legacies they want to leave, these next gen major donors actively craft their identities now and actively think about their own legacies.

The process of identity formation is important to all generations in all parts of society. But the process of philanthropic identity formation among these particular next gen major donors is especially significant, not just for the field of philanthropy, but for everyone affected by major philanthropy in our society. Again, these generations of major donors have the potential to become the most significant philanthropists in history. Providing a glimpse into their emerging philanthropic identities is the purpose of this study.

What we have found should help us all be less afraid as they take the reins. These next gen donors do not plan to let the legacies of philanthropy wither away. However, while they respect their families’ legacies and continue to give to similar causes and in similar ways as their families, they are also eager to revolutionize philanthropy. They want to make philanthropy more impactful, more hands-on, more networked. While these next gen donors want to change things fundamentally, they want to do so in responsible ways, honoring the past while improving the future. They take their roles as major donors seriously. And as they grow into these roles, they are also eager to be taken seriously.

To learn more and to join an ongoing discussion about the findings from this special report, visit www.nextgendonors.org.