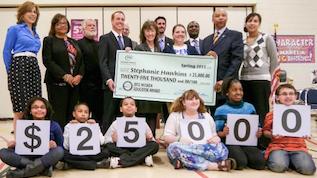 The recent Breakthrough Prize in Life Sciences established by tech giants Yuri Milner, Sergey Brin, Anne Wojciciki, and Mark Zuckerburg has been awarded to 11 scientists doing innovative research. At $3 million for each scientist, these awards are more than twice the amount of each Nobel Prize.

The buzz surrounding these awards has shed light on a giving method that has been growing in popularity for some time: prize philanthropy. This approach can be a useful tool for philanthropic leaders who are especially interested in bringing about radical new innovations or increasing awareness about a cause. But don’t close down your foundation or throw your giving plan out the window yet. Prizes are often more challenging to plan, advertise, and award than traditional gifts or grants. Prize philanthropy is not a replacement for traditional grantmaking, but can be a welcome addition to a family foundation or individual philanthropist’s toolbox.

What is Prize Philanthropy?

The Value of the Prize Process

The primary reason that donors typically engage in prize philanthropy is that prizes increase awareness of a particular problem and drive competitors to find a solution. Two other important benefits can result from the process of awarding prizes: reduced risk for the donor and faster problem solving due to competition.

How Prizes Can Be Game-changers

The ways in which prizes can bring about change can be broadly broken into the following categories:

Along with the benefits, there are also risks to consider before engaging in prize philanthropy. The broad issues that donors need to be concerned about are 1) how the process of awarding a prize might impede them from achieving the results they want from their philanthropy or 2) that awarding a prize could create unintended negative results. Problems can arise if a donor makes any of the following mistakes when creating a prize:

Teacher magazine called the “Oscars of Teaching,” have been given out by the foundation since 1985.  The initiative gives $25,000 unrestricted awards to outstanding education professionals across the United States.  Educators are chosen by committees appointed by each participating states’ department of education according to the following criteria:

These educators are recognized at school assemblies in their communities and also join the Milken Educator Network, a group of over 2,500 educators who previously received the award.  This network can be a valuable resource to educators as they move through their careers. Administering such an initiative every year is no small task. Three staff people work full-time and one works part-time on all of the elements of the Milken Educator Awards.

The Schmidt Family Foundation was established in 2006 by Wendy and Eric Schmidt to help transform the world’s environmental and energy practices with the ultimate goal of creating an intelligent relationship between human activity and the use of the world’s natural resources. The grantmaking programs of the foundation focus on raising awareness about climate change and alternative energy, collaborating with environmental funders across the United States to fund various environmental projects, as well as a place-based program in Nantucket. The environmental focus of the foundation has been carried over to a prize philanthropy project of one of the foundation’s founders, Wendy Schmidt.

Ms. Schmidt worked with the X Prize Foundation to develop the Wendy Schmidt Oil X Challenge, a $1.4 million competition intended to inspire innovative solutions to speed the pace of cleaning up seawater surface oil resulting from spillage from ocean platforms, tankers, and other sources.  Ms. Schmidt turned to the X Prize Foundation because she felt that creating a prize would “spur innovation in a unique way, bringing together scientists, technologists and inventors with leaders in industry and government to help introduce problem solving technologies to the marketplace with mechanisms for rapid deployment.” The challenge was designed to last for one year.  Teams were asked to more than double the industry’s previous best oil recovery rate.  At the conclusion of the challenge, the two teams had achieved this goal, and five additional teams also beat the industry’s best oil recovery rate.  The competition was considered particularly successful because rather than merely designing systems that would allow them to win the competition, the judges for the competition reported the teams had designed solutions that truly achieved the goal of developing replicable technology that would work in the real world.  Without the combination of Wendy Schmidt’s vision and philanthropic dollars and the X Prize Foundation acting as an intermediary, these advances in oil clean-up technology would not have been possible.

Prize philanthropy can be a successful philanthropic tool for philanthropists who are particularly passionate about finding and connecting with innovative problem-solvers, especially for problems with scientific or engineering-based solutions. When a prize works, the result is a proven solution. Consequently, prizes offer the potential for a great return on investment. Prizes are very public giving vehicles which require a lot of work to implement, but they can spur innovative solutions to seemingly unsolvable problems. Donors who devote the time and energy required to plan and carry out a prize will see results and be engaged in powerful philanthropy.