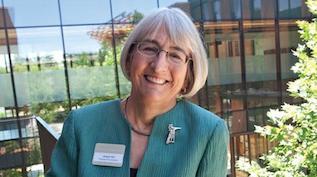 Participants include many of the country’s leading philanthropic families and industry thought leaders who have gathered to share fresh perspectives, new research and candid discussions about trends in family philanthropy, under the theme “Inspiration, Revelation, Transformation.”

“Susan Packard Orr embodies all of the values of the Distinguished Fellow: she is a family philanthropy icon, a leader whose experience and reputation distinguish her as an authority on the traditions and practice of family philanthropy, whose career is worthy of emulation – a touchstone for vision and best practice, and whose reputation contains commitment both to innovation and to the preservation of family philanthropy as a fundamental component of American democracy,” said NCFP President Virginia Esposito.

NCFP created the Fellowship program to nurture and showcase leadership talent for the field of family philanthropy. The Fellows program will engage three tiers, representing seasoned leaders, emerging leaders and an honorary Distinguished Fellow. This is the first time the Distinguished Fellow is being awarded. In this role, Orr will work with NCFP over the next two years to inform and shape resources for the field and frame discussion of critical issues. In addition, she will have the opportunity to identify and advance issues of personal concern within the context of the Center’s research and educational agenda.

Orr is the daughter of David Packard and Lucile Salter Packard who founded The David and Lucile Packard Foundation in 1964. She is the founder and chair of Telosa Software, a company launched in 1986 still providing software solutions and support to nonprofit organizations across the country and around the world.

Having been part of the Packard Foundation since early in its founding, Orr has also been part of leading the Foundation through two significant transitions. The first followed the death of her mother and, nine years later, her father. She assumed the chairmanship of the Foundation in 1997. The Foundation has welcomed members of the third generation and is currently preparing for future generations to join the board. The Foundation also has a long commitment to inviting general trustees on its board.

Orr has been an active trustee on nonprofit organization boards, many of which have a deep connection to her family and the Packard Foundation. She is a trustee of the Lucile Packard Children’s Hospital, the Monterey Bay Aquarium, and the Packard Humanities Institute. She is a former trustee of the Lucile Packard Foundation for Children’s Health and Stanford University. Orr also served for seven years on the board of the Hewlett-Packard Company.

“I’m honored to be selected as the first Distinguished Fellow in Family Philanthropy by the National Center on Family Philanthropy,” said Orr. “During my time as a fellow, I am excited by the prospect of learning as much as I can from the wisdom and insights of countless families who use their family foundations to pursue their philanthropic passions, and to share ideas and experiences as we put our values into action.”

About The National Center for Family Philanthropy

The National Center for Family Philanthropy (NCFP) is the only national nonprofit dedicated to families who give and those who work with them. NCFP provides the research, expertise and networking opportunities necessary to inspire our national network of giving families every step of the way on their philanthropic journey.  Families learn to transform their values into effective giving that makes a positive and enduring impact on the communities they serve. Learn more about the value of family philanthropy at ncfp.org.