The 10 Biggest Trends in Family Philanthropy

The 10 Biggest Trends in Family Philanthropy 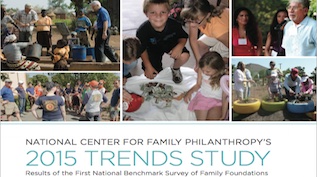 Many of us have been noticing the changes anecdotally for years. We’ve seen an influx of new organizations, new ideas, and new approaches that are ushering the practice of family philanthropy into a new era.

With the release of the National Center of Family Philanthropy’s 2015 Trends Study, we now have data to support these observations.

The study reveals a number of important trends that not only reflect a changing field, but also inform where family philanthropy is going.

Below are 10 trends that have captured our attention — and will be shaping the field for years to come:

Thanksgiving is typically a time where philanthropic families get together to not only give thanks, but also to discuss the specifics of why and how we give back. This year, as you discuss your family’s philanthropy — past, present, and future — we also invite you to reflect on some of the key trends from this new study.

Which trends are you seeing? We’ve chosen 10 — but there are many others in the study that are worthy of discussion.  Read the full report and share your insights and reactions with us at jason@ncfp.org or share a comment below to identify other trends we should be watching.