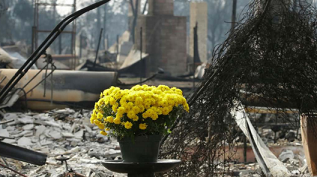 In September, someone from San Francisco said to me “Wow…it’s been a year since the North Bay wildfires.” I quickly blurted back, “you mean 11 months.” Here in Santa Rosa, we are all hyper-aware of exactly how long it’s been since we awoke to middle-of-night flames. We approach the anniversary with a combination of dread (reliving it all over again) and relief (let’s just get to the other side).

The anniversary creates a natural milestone for reflection and questions. Both the practical: do we now have adequate fire insurance and disaster plans, and do we better know our neighbors? And the strategic: as grantmakers, what have we learned along the way?

So many of these lessons are ones that you—our colleagues at other foundations—shared with us in the early days of the wildfires. Though we believed you from the get-go, our lived experience makes us better advocates for these principles today.

In the early aftermath of the fires, we often said “disasters are an equal opportunity destroyer” as members of our community needed support, no matter their socio-economic background. The fire did not choose only our most vulnerable populations, including communities of color, seniors, children, and people in poverty. Fast forward to now: it is clear that those populations are the most impacted. If the disaster didn’t discriminate, the recovery certainly does, as those with resources are able to recover faster, while others are left behind.

A recent study, published in the journal Social Problems revealed that wealth inequality increases after disasters. It stated, “As local hazard damages increase, so does wealth inequality, especially along lines of race, education, and homeownership.”

This unequal recovery is worrisome, and shapes our grantmaking strategy, using equity as a lens to for all of our disaster recovery grants.

Nonprofits were heroic second responders in the relief efforts, and many received one-time funding from the outpouring of generosity immediately following the fires. As the initial burst of philanthropy waned, their “day jobs” beckoned and many of our local agencies were faced with fulfilling their core mission and adding in new programs and services. Many staffers were also fire survivors themselves, with 85% of nonprofit organizations reporting having been affected by the fires. Forty-one percent of organizations reported reduced fundraising at year-end.

This year, as “giving season” approaches, nonprofits are concerned about possible long lasting trends in giving as they know some of their donors have left the area, and others are fatigued by giving so much to fire recovery efforts last year.

To combat this, we encourage our donors to continue to give to all of the organizations they supported prior to the fires. This is a time to dig deep for gifts towards fire recovery in addition to annual giving.

3. Trauma is Slow to Show Itself.

The National Center for PTSD warns that this stage, Intermediate-Recovery brings with it “disillusionment: disappointment in the disaster response, and hopeful expectations may give way to resentment. This disillusionment can occur when outside relief workers leave and affected individuals realize that they are ‘on their own’ with a lot of work left to be done.”

This aspect of the recovery process has been called the “second disaster” because it presents new adversity, loss, conflict, and potential trauma. Addressing the long term-effects of trauma is vitally important to the overall health and resiliency of our community. Knowing this, we identified healing the long-term effects of trauma as one of three major focus areas of our fund. We believe this is an opportunity to not only provide greater mental health tools and support but also to educate and reverse the stigma around seeking mental health support.

4. Bolder, Faster Grantmaking is Called For.

We love track records, sustainability promises, and strategic plans as much as the next funder, but the aftermath of a disaster is the time to take risks and to do grantmaking not-as-usual. Several of our most significant grants have been to collaborative organizations that did not exist before the fires. We’ve helped to bring in nationally recognized disaster programs from other parts of the country.

One of the positive unintended consequences from the wildfires is the swift evolution of innovative partnerships. Our grantmaking must match this innovation and urgency—we are giving both larger grants to meet large-scale needs, along with funding new projects and new organizations.

We have adjusted our timelines and applications processes as needed. In addition to our grants, we look for other ways we can support these new leaders and organizations in a hands-on way through ongoing partnership and collaboration.

5. Other Funders Are a Reliable Support Network.

In my 20+ years in philanthropy, I’ve never before experienced such an outpouring of support from other funders and from coalitions of funders, including and especially NCG. To the extent that we are making a difference in our community’s recovery, we are doing so on the shoulders of foundation leaders who had disasters of all sorts strike their communities.

The advice and support we received was invaluable. The question moving forward is: how can we replicate the outreach and support that was so easy to offer in urgent times to the more chronic challenges our communities face every day?

We are looking for the small ways we can pay back (and pay forward) the support received, with a special eye towards making available the lessons we’ve learned along the way.

Thank you for the many ways you’ve reached out over this past year. #StrongerTogether indeed.