Have Donor-Advised Funds and Other Philanthropic Innovations Changed the Flow of Giving in the United States?

Have Donor-Advised Funds and Other Philanthropic Innovations Changed the Flow of Giving in the United States? 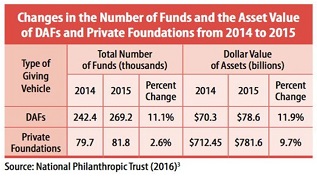 Giving intermediaries are nothing new, and include a range of vehicles such as workplace campaigns (like the United Way and the Combined Federal Campaign) and community foundation general funds. Of late, such giving intermediaries have found their donors less willing to give into a general fund—where others make decisions about the final destinations of their gift—and more in favor of maintaining decision-making control in a donor-directed grant or donor-advised fund (DAF) within these intermediaries, and in the commercial charitable funds at financial institutions. This article addresses several concerns that have been raised about DAFs and other philanthropic intermediaries, and explores in particular how the growth of DAFs affects the flow of money to nonprofits. Accompanying sidebars explore in short form other influences on the flow and the accuracy of how charitable money is counted.