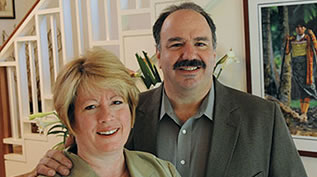 When Karen and Jim Ansara contacted the Boston Foundation on January 14, 2010 to talk about how their family’s donor advised fund could best respond to the earthquakes in Haiti – which had happened less than 48 hours before – they were continuing both a longstanding commitment to international philanthropy, as well as a more recent commitment to Haiti in particular.

Working with staff at The Boston Foundation, the Ansaras quickly formulated a plan: they would announce a $1 million matching grant for the creation of the Haiti Fund. This fund would focus on long-term human rights and reconstruction issues in Haiti, while raising awareness about the need for long-term philanthropic investments for this work. For its part, the Board and staff of the Boston Foundation agreed to help coordinate the Boston philanthropic response to the Haiti crisis and to help convene its community of donors to work with the Ansara’s on these issues.

The Ansaras had established the fund at the Boston Foundation in 2005 following the sale of Jim Ansara’s company, and had folded their small family foundation into the fund in 2009. The Ansara Family Fund operates as a hybrid donor advised fund, with an independent identity and website, regular grant cycle, clear mission statement and specific areas of focus – but without the sometimes cumbersome legal and reporting requirements of a private foundation. Jim and Karen invite proposals and review them with Boston Foundation staff as their advisors; all grants must be formally ratified by the Boston Foundation’s Board of Directors.

“We were intrigued by the Boston Foundation’s role as a convener of non-profits and thought leaders, their stature in the community, and their great interest in working with us to facilitate our international philanthropy,” explains Karen Ansara of the decision to work with the Boston Foundation.

This decision was about to pay immediate and unexpected dividends. The Haiti Fund was announced on January 14th. Within a month – thanks in part to the creative outreach efforts of Kate Guedj and other staff members at the Boston Foundation – more than $1 million had been raised to match Jim and Karen’s founding gift.

“When we set up our family fund with the Boston Foundation, we obviously had no idea we would be setting up the Haiti Fund,” says Karen Ansara. “A big part of the reason we were able to raise $1 million in less than a month is that people trust the Boston Foundation. They reached out to many of their donor advised funds. It was really an extraordinary response.”

As fate would have it, on the day of the quake, Jim Ansara was meeting with representatives from Partners in Health, an acclaimed international healthcare NGO that has had a presence in Haiti for more than 20 years.

“We had made our first grant to Partners in Health in the fall of 2008 in response to the hurricanes that year. We had an acquaintance working with Partners in Haiti, and Jim had read Mountains Beyond Mountains about Dr. Paul Farmer, the founder of Partners, a few years before. In the spring of 2009, Jim took a trip to Haiti with Dr. Farmer and other Partners in Health staff to look into the possibility of investing in and helping to start a project to create jobs in the central plateau region of Haiti. On that trip he met with the country’s Prime Minister, Minister of Finance and the Minister of Education, and he was simply blown away by the degree of poverty and powerlessness – and the incredible sadness – of the place.

“While the economic development program was slow to develop and move forward, Dr. David Walton, a Boston-based doctor who is a volunteer in Haiti with Partners and who had been introduced to Jim on the trip, called afterward to say that the Haitian Government had donated a piece of land to Partners in the city of Mirebalais, a regional center an hour from Port-au-Prince, to build a new 300 bed hospital. Knowing Jim’s background in construction, he asked if Jim would help. Jim went last fall with Dr. Walton and a group of engineers to survey the site and began working with David and Architect Ann Clark to plan and design the hospital, which will be staffed by Partners affiliate organization Zanmi Lasante.

“Jim and David were in Boston working on the plans for the hospital most of the day on January 12th. They were just wrapping up their meeting when they heard the news about the earthquake. David flew to Haiti the next day – he was one of the first U.S. doctors on the ground – and Jim joined him two days later on Saturday after facilitating getting 30 other doctors, nurses and medicine, and supplies on private planes to Haiti.

“Jim didn’t expect to actually go to Haiti as he expected to help coordinate the relief effort from Miami, but they needed him. Partners in Health was trying to help get H.U.E.H, the major hospital in Port-au-Prince going again and there was no electricity, and the doctors and emergency response teams had to rely on generators. Jim was there on Saturday after the earthquake trying to get generators operating for the surgical tents and in-tact rooms at the University Hospital in Port-au-Prince. His job was to get electricity going and to inspect the buildings to see if people could go in. But he was also helping to transport patients and find supplies for the makeshift operating rooms and generally help out where every he could. It was really a first-hand, powerful experience.

“Right before he left we decided to launch the Haiti Fund.”

Karen Ansara understands what she and her family are getting into.

“The dimensions of this project are certainly much bigger than we thought when we started.”

Karen says that at least one goal of their work in Haiti is clear: “we need to strengthen the areas outside of Port-au-Prince and to make them more habitable for people so that the outmigration of one million people that has been happening will stay permanently out of the city. Port-au-Prince was only built for 500,000 people – there’s no way it can continue to accommodate the 3.3 million people living there before the earthquakes.”

Another goal is also clear: it’s vital that the voice of Haitians themselves be at the forefront of the conversation. In support of this, the Haiti Fund, Barr Foundation, UMass Boston, and the National Association of Haitian Elected Officials recently co-sponsored Haitians Building Haiti: Towards Transparent and Accountable Development, a conference timed to influence the March 31, 2010 UN International Donor Conference at which countries and financial institutions made pledges for Haiti’s reconstruction. At the event, more than 100 Haitian leaders from the U.S., Canada and the island of Haiti gathered to develop a set of five principles designed to ensure that the Haitian rebuilding process is transparent, accountable and built on the dreams of ordinary Haitians. The principles paid immediate dividends: Massachusetts State Representative Marie St. Fleur presented the principles on the floor of the United Nations, and a New York Times editorial writer attended the conference and captured them in a Times op-ed piece.

“We asked Haitian community leaders to talk about how they want Haiti rebuilt and what role they want to play in the process. And, apparently, they’re rarely asked! Haitian citizens have been very disempowered, and have very limited experience in having a true democracy. We’re hoping to help change that.”

Going forward, the Haiti Fund has formed an experienced grant committee of Haitian Americans, Haitian islanders, and international development experts. “We look forward to partnering with effective Haitian-led grassroots organizations in Haiti, as well as organizations that serve Haitians here in the Boston area,” says Karen.

The Ansara’s rapid and deep engagement in the Haitian recovery efforts is the latest example of their sustained approach to international grantmaking. The Ansaras believe that to make a permanent difference in the seven regions where they have chosen to direct their giving, they must build multi-year partnerships with organizations effecting positive change. The Fund now makes grants in Ecuador, Peru, Nicaragua, Haiti, Nepal, Afghanistan, and Greater Boston, while following four core principles that guide its grantmaking, as described on the Fund’s website:

▪ Bottom-up Change: We favor bottom-up initiatives that put the poor in charge of their own dreams and destinies, and that build the capacities of the organizations that work on their behalf.

▪ Sustainable Strategies: We support lasting solutions and models that can be shared and brought to scale.

▪ Immediate and Systemic Support: While our focus is not on disaster relief, we do support programs that alleviate immediate suffering while aiming to eliminate the systems and root causes that produce it.

▪ Collaborations: We seek continual learning, self-reflection, evaluation, and collaboration among development workers and funders – and, most of all, a relationship of genuine partnership.

Passion and expertise leads to a lifelong commitment

“It’s pretty clear that our commitment is for life,” says Karen.

“The people of Haiti can’t survive short-term commitments at this point, they really need partners. Given that my husband is so connected now, emotionally as well as socially and financially, this is something that our family can and must do. That’s one of the wonderful things about this for us; prior to the earthquake, I was really leading our philanthropy and Jim was leading the business side of things. But now we’re really doing something together with all of our energy. And we’ll be there for the rest of our lives.”