Ana became a philanthropist and grant maker when her great aunt and great uncle formed the Guadalupe and Lilia Martinez Foundation, a family foundation dedicated to helping nonprofits in the South Texas area. She is currently a board member, in charge of community relations, and youth philanthropy development for her family’s foundation.

Ana graduated from Texas Christian University with a degree in Radio/Television/Film and went on to have a career in television that spanned 20 years. During this time, she worked in commercial television, sports broadcasting, and local government programming. She has won numerous state and national awards for producing, editing and writing, including two Lone Star EMMY’s.

She lives in Allen, Texas with her son, Brendan, who is a Senior at Allen High School. 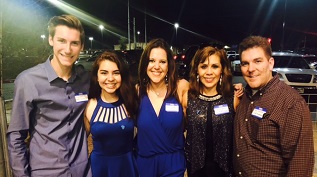 Their Junior Board had been doing collaborative grantmaking for two years, but the community didn’t know them very well. A "Meet and Greet" would be the perfect opportunity to let the world of philanthropy in Laredo gather on a larger scale… Read More