Jeff Raikes is the co-founder of the Raikes Foundation, which he and his wife, Tricia, established in 2002. Jeff retired from his role as chief executive officer of the Bill and Melinda Gates Foundation in 2014, having guided the global organization through more than five years of significant growth. He came to the philanthropic world from a 27-year career at Microsoft Corporation, where he was a member of the senior leadership team and president of the Microsoft Business Division. He serves on the boards of Costco Wholesale, the Jeffrey S. Raikes School of Computer Science and Management at the University of Nebraska-Lincoln, and the Microsoft Alumni Network. He is a trustee of Stanford University, where he holds a bachelor’s degree in engineering-economic systems. 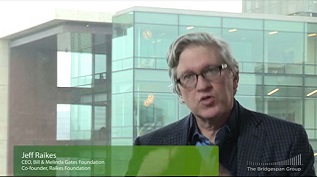 Given the power dynamics in philanthropy, “you have to work hard to make sure you’re getting honest, objective feedback” from grantees, says Jeff Raikes. “Otherwise, you’ll end up being misaligned” and the partnership won’t work. View the video, part of Bridgespan’s Remarkable Givers Video Series, by clicking on the image below:… Read More