Zoë Lloyd Foxley has served in leadership roles on two of her family’s foundations. Since 2002, she served on the board of General Service Foundation, which funds social change in the areas of economic and reproductive justice, and in building the capacity of base-building organizations in Colorado. As a fourth-generation family member, she has served as a foundation fellow, co-chair of the Investment Committee, was involved in the generational succession process, and is currently serving as Vice Chair of the board. Additionally, since 2003, she has served on the board of the John M. Lloyd Foundation, a family foundation dedicated to understanding and impacting the root causes of HIV/AIDS through funding policy and advocacy. In 2011, Zoë succeeded her father and became chair of the board. Since 2004, Zoë has also been involved as a constituent, donor and organizer within Resource Generation, an organization that organizes young people with financial wealth to leverage resources and privilege for social change. She has been active in the Creating Change Through Family Philanthropy program. Zoë graduated from Vassar College as an Art History major in 2001, and from the University of Southern California in 2010 with a Masters in Social Work. 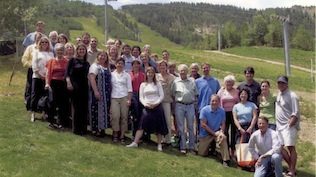 Family foundations celebrating their 20th, 40th, 50th or 60th anniversaries have found creative ways to honor the giving legacy of the donor and subsequent generations, while also celebrating the importance and potential of their nonprofit partners… Read More