The Atlantic Philanthropies were founded by entrepreneur Chuck Feeney, who decided in 1982 to devote his wealth to the service of humanity. A champion of Giving While Living, Feeney has long maintained that people of wealth should use it to better the world during their lifetimes. That belief, which has been a driving influence in our work, led our trustees to decide in 2002 to limit Atlantic’s life to a fixed term.

Atlantic, which plans to close its doors in 2020, completed its grantmaking at the end of 2016. Over 35 years, we invested a total of $8 billion in promising programs and people and in places where we saw the chance to create opportunity and promote greater fairness and equity for all. Because we believe that it’s imperative to address deeply rooted problems sooner than later, many of our grants were “big bets” designed to produce lasting results.

Posted on April 24, 2020 by Atlantic Philanthropies 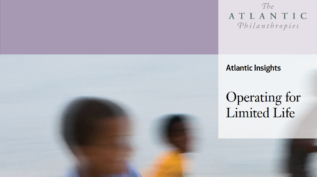