Dr. Francis J. Butler retired as president of FADICA in 2012. FADICA is a network of private funders who share a general interest in Catholic sponsored activities. Dr. Butler has advised some of the largest private foundations in the United States on charitable, religious and educational trends. Previously, he served as Senior Domestic Social Policy Advisor to the American Catholic bishops’ conference. Dr. Butler has served as chairman of the ad hoc Committee for Religion and Philanthropy of the Council on Foundations and is editor of Catholic Identity: Essays in An Age of Change. He holds doctorate and bachelor’s degrees in theology from the Catholic University of America, and a master’s degree in theology from the University of San Francisco. 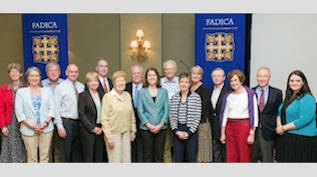 Catholic family foundations have organized into a donor group that provides highly motivated, carefully directed giving to nurture and revitalize Catholicism in the U.S. and worldwide. This overview from 'Faith and Family Philanthropy' features a brief history of Catholic philanthropy, and a discussion of the current challenges and opportunities for Catholic donors in the U.S. and worldwide… Read More