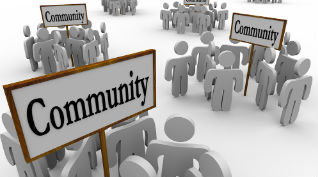 Family philanthropy has been at the heart of the community foundation field since its inception. In 1914, Frederick H. Goff and his family created the first community foundation in Cleveland, Ohio.  Since then, tens of thousands of families, individual donors and corporations—many of them family businesses—have helped to launch, sustain, and grow the more than 700 community foundations that exist across the United States.

Throughout 2013, the National Center for Family Philanthropy is looking at the special relationships that families have with their communities. In this issue of Family Giving News, we share examples of innovative partnerships between giving families and their local community foundations.  The Council on Foundations estimates that the community foundation sector manages approximately $58 billion of charitable assets and serves an estimated 86% of the U.S. population. Between 2011 and 2012, donor advisors at community foundations increased the assets held in these funds by 22%, on average.

Family giving through community foundations is fueling much of this growth and the benefits for all parties are clear: leverage, community knowledge, opportunities for collaboration, efficiency and—most importantly—greater impact.

“It’s in the best interests of all funders, whether we’re foundations, donor advised funds or individuals, to encourage sharing and learning so we can have a greater impact on our communities,” says Keith Swayne, co-founder of the Keith and Judith Swayne Family Foundation.

The Swayne’s family foundation, located in Orange County, CA, was established in 2005 by Keith and his wife, Judy, and currently has less than $10 million in assets. But Keith and Judy have a big vision for philanthropy in their community. Keith is a longtime philanthropist and volunteer; Judy founded the Orange County Community Foundation (OCCF) 24 years ago and served as its president for 10 years.

From this vantage point, they could see the dispersed nature of family philanthropy in the growing county of 3 million people. There are over 650 family foundations in the county but 63% have less than $1 million in assets, according to the community foundation.

“It’s a large population of essentially small family foundations, and in most cases, they are giving from a ‘checkbook’ perspective versus a more strategic, staffed approach,” says Shelley Hoss, president of OCCF. “Often it’s still the first generation that is running things, perhaps with the help of a consultant,” she adds.

Given this environment, Keith and Judy saw tremendous potential in the convening role that community foundations often play. They joined with OCCF to host regular meetings of area family foundations, to facilitate networking, information sharing, and learning opportunities. In November 2011, the Family Foundation Alliance was formed.

“One of the first decisions we made was that the group needed to have an identity independent of the community foundation, and that the family foundations should really be in the lead and we should be in a sort of a background, supporting role,” said Shelley. “We developed a logo to give the Alliance a separate identity, and we use that in all communications related to the Family Foundation Alliance activities.”

A second major decision regarded membership in the Alliance. To create a safe space for candid conversation, the Alliance is only open to family members, sitting board members of family foundations or full-time executive staff.

“The group has, to our great surprise, now drawn 50 local foundations, half of whom had very little contact with each other or with us,” explained Shelley.  “Clearly there was a distinct need for this type of network.” Regular meetings include roundtable discussions of issues and practice, as well as outside speakers, leveraging the expertise of the community foundation staff as well as other family foundations.

Keith sees very tangible benefits from the Alliance around learning and collaboration. “The knowledge of the community is being broadened, our individual and collective knowledge, and our understanding of the issues in the community,” he notes. “We also are creating avenues for collaboration,” citing joint efforts and investments that are being explored by members of the Alliance.

A different type of partnership can be found in Minnesota, where the Mardag Foundation turned to its local community foundation for administrative, investment, and programmatic support. Founded in 1969, the Mardag Foundation was launched by the estate of Agnes Ober, a dedicated civic leader in St. Paul who wanted the foundation to be able to support organizations throughout the state of Minnesota.

However, with the majority of family members and trustees living in St. Paul, and no professional staff, the Foundation faced challenges in fulfilling their statewide mandate, in establishing standardized processes and in determining the impact they were making with their giving.

Explains Tim Ober, president of the foundation and grandson of Agnes Ober, “The work of the foundation was quickly growing beyond the part-time work that was available for the trustees to give.” Through board connections with the St. Paul Foundation, which also houses the Minnesota Community Foundation, the trustees quickly realized the benefits a partnership would offer.

“When we compared the cost of opening and staffing our own office versus hiring the St. Paul Foundation,” explains Tim, “the efficiencies of scale involved put the cost factor significantly in St. Paul’s favor. We were, and feel we still are, getting for more bang for our buck using the community foundation as our staff.”

Tim also cites the access to knowledgeable program staff and foundation systems as key benefits. “We now have access to a large pool of program officers, who specialize in their respective areas, such as education or the arts,” says Tim. “We have a presence in Greater Minnesota that we didn’t have before, with about 50% of our grants now going to programs throughout the state. We have an open and standardized grant process; I think we have greater respect from our nonprofit partners.”

The Mardag Foundation also pooled its endowment with the St. Paul Foundation, gaining access to the investment advisors, funds, and tools offered by the foundation to all of its donors.

Spurred in part by its successful partnership with the Mardag Foundation and a second family foundation, the St. Paul Foundation has taken collaboration to a whole new level with the launch of Minnesota Philanthropy Partners (MN Partners).  ”MN Partners is not an organization, rather a network of more than 1,700 foundations and funds across the state that are working together to share services, learn together, and occasionally invest together in programmatic initiatives. Together, MN Partners is a powerful philanthropic force representing more than $1 billion in assets.

Tim describes how this broader collaboration has benefited Mardag as well as the community. “There is an early childhood education project that a number of us have invested in that has established a great track record of success. None of us could have done this on our own, but together we were able to make this wonderful project happen,” he notes.

The Center for Family Philanthropy, The Community Foundation for Greater Atlanta

Families are central to the work of the Greater Atlanta Community Foundation, with assets of $750 million and more than 750 donor advised funds, with the majority established by giving families. In 2000, as part of a new strategic direction to place more emphasis on serving its donors, the Community Foundation established the Center for Family Philanthropy. Donors and their families are members of The Center if their funds are greater than $250,000 or if they have a planned gift of $1 million or more. The Center works extensively with these giving families, providing a range of innovative services for the field, including:

“We listen to our donors, get to really know them, and try to meet them where they are,” describes Audrey Jacobs, director of the Center for Family Philanthropy at the Community Foundation. “Many of our donors are focused on engaging the next generation; they don’t want to be their children’s ATM machine,” she notes.

The Center’s programming for young children has been especially popular with these families, says Jacobs. The Planet Philanthropy program was launched in 2000 as part of the donor-focused strategy, and features a day-long  program of grantmaking and service at the end of the summer for children of the foundation’s donors.

“They learn about some basic concepts in philanthropy, and then they work together to make a group grant,” explains Jacobs. “Usually we provide proposals and reading materials to support this process and our staff plays a role as well. This year, five non-profits did pitches , and our young philanthropists awarded a grant to the best pitch.”

The giving portion of the program is augmented by an afternoon volunteer activity, which took place this year at the Atlanta Community Food Bank.

“Family philanthropy is about children, parents and grandparents, all working together,” says Jacobs. “It really is an opportunity for learning and strengthening family ties.”

Teacher, convener, advocate, advisor—community foundations play many roles—to name just a few. Today, many community foundations and giving families are finding new ways to leverage their expertise and assets for their own benefit and to create lasting impact in the communities they care about.

For more information on this topic, you may view a replay of the August 2013 webinar featuring the three community foundations described in this story, review the Storify compilation of tweets with highlights from the webinar, or read this month’s Ask the Center featuring answers to a variety of questions posed by participants on last month’s webinar.

In his May 2012 article, “Partnering for Success” How Family Foundations Benefit from Relationships with Community Foundations,” Mark E. Neithercut, principal of Neithercut Advisors, shares several additional important benefits that family foundations should consider when thinking about how to take advantage of the services available from community foundations. These include: