The Best Mistake We Ever Made: Jessie Smith Noyes Foundation

The Best Mistake We Ever Made: Jessie Smith Noyes Foundation 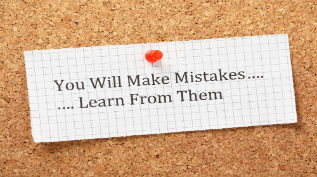 Introduction: The Best Mistakes We Ever Made

A sure-fire indicator that we all make mistakes was the capacity crowd at the National Forum on Family Philanthropy workshop in Seattle entitled, “The Best Mistakes We Ever Made.” Using a rapid-fire format, each of ten speakers took three minutes to share a mistake they made in their family philanthropy experience. To set the context, each speaker explained the goal and framework by responding to, “What were you trying to do”? Next they explained, “What happened that was unexpected – in other words, what went wrong?” Finally, and most importantly, we asked the mistake-makers to share, “What did you learn from your mistake?” In other words, how did the foundation changes its practices as a result?

Each of the situations was different, of course – but common themes emerged. Exercising all of the due diligence tools that we have at our disposal was one. Mistakes in this vein included: inadequately pursuing financial red flags; allowing personal relationships to blur professional boundaries; over relying on the national “name-brand” of an organization; and not trusting one’s intuition. Whether the grantee is new, established, large or small – taking short cuts or truncating due diligence often resulted in a mistake, whether it be a grant that performed poorly or an internal procedure that failed to work as hoped.

Another area rife with mistakes was collaboration. Lessons shared by speakers at the session included:

A third theme was less than stellar efforts to involve family, including discretionary and matching grant programs that felt rote or obligatory rather than inspiring. Because these programs were secondary to the main body of grantmaking, insufficient thought, preparation and policy formulation were invested resulting in low engagement and extra work for staff.

Big picture: we learned how important reflection is in mistake-making. Taking the time to understand not only what went wrong, but how you can learn and change is key. Decision-making behavior based on both successful AND failed experience sharpens judgment and makes us all better philanthropists.

This month, we are delighted to feature one of the best mistakes ever made by NCFP’s Friend of the Family, the Jessie Smith Noyes Foundation, as told by JSN’s Board Member, Jenifer Getz.

Many years ago, as our family foundation moved from a small family run foundation with a family board to a larger, more diverse board with a paid president, we made a great mistake that helped move us to towards one of our defing characteristics, a foundation in which funding, board, and finances reflect our vision and values. My mother, a board member since 1962 who holds much of the Noyes Foundation tribal knowledge, told me this story.

There had been a typical board retreat, where board business had been discussed, grants had been approved and the investments reviewed by the finance committee. As the board and staff talked over dinner, the foundation president began a conversation about Intel and the environmental impact it was having on the Albuquerque, New Mexico water supply, where it had just built a chip making plant. There was much shaking of heads and gnashing of teeth over the negative impact this plant would have on the environment in New Mexico.

At that point, someone in the group pointed out that the Jessie Smith Noyes Foundation held stock in Intel, and that we had reviewed and approved those investments earlier that very same day. It was an eye opening moment, and the beginning of what led to our policies on socially responsible and mission related investing as well as our decision to sell investments that did not align with our mission.

But the road was rocky. Few investment managers screened funds; they feared that screened funds would not provide the return of unscreened funds, and we knew of no other foundation acting on these concerns.

It has been a long road – about 20 years – but our investment policy now reads:  “We recognize that we are fiduciaries and our fiduciary responsibility does not end with maximizing return and minimizing risk.

We believe that efforts to mitigate environmental degradation, address issues of social justice and promote healthy communities should be incorporated as part of business and investment decision making. We believe that management, directors, employees and investors should consider these issues in the pursuit of financial objectives.”

For the Jessie Smith Noyes Foundation our investing mistake was one of the best mistakes we ever made.