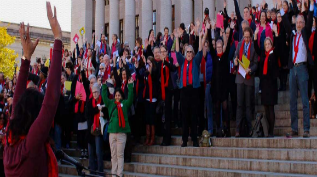 Editor’s introduction: This week, hundreds of foundation board and staff members will be visiting our nation’s capital for the annual Foundations on the Hill event. Foundations on the Hill brings foundation leaders to DC for meetings with Congress about key issues of importance to foundations and philanthropy. In recognition of this year’s event, we’re pleased to share this special guest post featuring the perspectives of one of the nation’s leading family foundation advocacy funders – the Seattle-based Campion Foundation.

Robert E. Ross, President of the California Endowment pointed out recently that, “philanthropy often vigorously works to protect its brand and doesn’t spend it enough.”Part of that insufficient brand spending includes advocacy. Advocacy is the single most effective strategy to achieve social impact. Without advocacy, achieving real social transformation is not possible. It provides both the scale and pathway to implement the solutions foundations fund. Yet there remains a tendency to undervalue and avoid it as a grant making strategy for a multitude of reasons based on misperceptions, fear, and often impatience for quicker results. According to research funded by the Aspen Institute, while more nonprofits report engaging in advocacy over the last decade their participation and engagement are sporadic and inconsistent. The number one impediment cited was a lack of resources—most prominently foundation funding.

So what can be done to shrink this gap between the possibilities advocacy affords and the reluctance of foundations to fund it? For starters, we need a different narrative, one that is more focused on possibilities and less on pitfalls. Its always important to get educated before pursuing any activity that has legal rules attached, but then as a sector philanthropy needs to move beyond those conversations to narrowing the gap. We also need to be inspired by stories of foundations funding advocacy so that we can change the dominant narrative from “advocacy is political and fraught with uncertainty” to “understanding advocacy is imperative for advancing social change.”

One foundation that has understood this reality from early on in its grant making is the Campion Foundation. Its co-founder and President, Sonya Campion, and I recently connected at the YWCA Leadership Institution and had the opportunity to identify three shifts needed for philanthropy to develop a new advocacy narrative

1. Advocacy is not about politics – it is about fulfilling the mission.

The first step for foundations interested in advocacy is to get educated about the issues central to their mission and to identify good leaders working to change the landscape. Too often philanthropy confuses policy and politics. That way of thinking never occurred to Sonya and her husband Tom. “We went in through the mission and made advocacy mission central. It wasn’t a matter of politics, it was a matter of policies that could dramatically impact our (grantees) ability to deliver mission. We have an obligation and ultimately a responsibility for getting the highest amount of leverage for every dollar.” Many foundations, including Campion, find it’s easier to get involved in advocacy through grantmaking because grantees have more flexibility than a foundation. It’s also important at the same time to educate the foundation’s board about what’s legal and to not get in the way with overly restrictive grant language. Recently, Sonya and her husband Tom started the Campion Advocacy Fund, a 501c4 so they could more directly leverage their influence to lobby without fear of violating private foundation’s legal limits.

2. It’s not about being controversial, it is about leadership and supporting your grantees.

A key leadership piece missing from many foundations is board engagement and support for advocacy. Board Source recently started the Stand for Your Mission Campaign, supported by the Campion Foundation, to encourage more nonprofit board members to speak up and have their voices heard. According to Sonya, once a foundation connects the dots between advocacy and its mission “it’s then about rolling up your sleeves, convening your grantees and asking them (most of whom are publicly funded), what do they need, instead of making assumptions that because they haven’t asked they don’t need advocacy training.” Campion started funding advocacy capacity building for the grantees in their homeless portfolio after witnessing their struggles to engage effectively during legislative battles. Sonya pointed out that most nonprofits are grantees that are living in fear waiting for policies to shake out. In order to sustain the external advocacy it became apparent that their grantees needed their internal systems strengthened. For foundations newer to funding advocacy, adding $5000-$10,000 extra on to existing grants for capacity building is one easy way to begin helping to sustain their grantees advocacy efforts.

3. It’s not about paying for the soup. It’s about ending the soup line.

For the Campion Foundation funding advocacy started as a practical and effective strategy for tackling two big problems, protecting federal wilderness lands and ending homelessness in Washington State. “We recognized we couldn’t buy or build our way out of either (initiative). And you know what, neither can the Gates Foundation.” When Sonya first started out in philanthropy she participated in Funders Together to End Homelessness and learned a lot about the systems and structures that contribute to homelessness, including tools like community mapping of assets and structures. “We decided that instead of paying for the soup, we would rather get people out of the soup line.” As a smaller foundation, the Campion Foundation made a strategic decision to invest in advocacy because they knew they could never buy enough soup or provide enough direct aid to solve the problem of hunger amongst the homeless, so instead they focused on going upstream and using advocacy to change the policies so fewer people would find themselves in the soup line. “We can test things out and apply research and innovation that they can then take to scale. “

Advocacy provides far more impact than direct service alone and at some point it becomes a practical concern when comparing the scales of investment. Government systems and government funding “are the big titanic” that can make a difference if targeted with advocacy. Government has billions. Individual foundations can never reach the same scale, but collectively their influence and their grantees advocacy provides more leverage.

Interested in learning more? Join the Stand for Your Mission Campaign sponsored by Campion Foundation and led by Board Source and the Alliance for Justice.