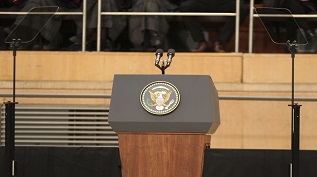 Thank you, Mayor Landrieu, for that kind introduction and your leadership here in New Orleans, and also as chair of the United States Conference of Mayors. Your courageous leadership in the city has amazed me during the long period in which we have partnered here. Recently, I received a copy of the equity plan for New Orleans, this plan that you assembled and are implementing – based on an agenda of equity, violence reduction and resilience – is commendable and truly making New Orleans an example for the country.

I’d also like to acknowledge Gov. Terry McAuliffe, whose leadership is helping the state of Virginia take bold strides forward. I particularly applaud his efforts to restore voting rights to nonviolent, ex-felons. Because of his hard work, more than 156,000 former inmates regained their voting rights this spring, giving them a stake in the future of their communities. Restoring pride and privileges to nonviolent, former inmates establishes their dignity and decreases recidivism.

A few days ago, I watched the film Detroit, which depicts the horrific police brutality and racism surrounding the Algiers Motel incident during the rioting of 1967. Those of you who have not yet had the opportunity to watch the movie, this film is about three black teenagers who were beaten and killed by police; yet, all of the police were set free. I don’t think that’s a spoiler alert, because we all know that storyline.

As I watched the film, I was stunned, it moved me in ways I had not anticipated. It became distressingly clear that the only thing out of place for me was that it was 50 years ago. As the story unfolded, I reflected on the main elements – black teenagers killed by police officers, all acquitted – if I didn’t know better, I would think this was a newspaper headline from yesterday, today and, unfortunately, maybe tomorrow, unless we in this room take the leadership necessary to change this narrative for the future of our country.

We at the Kellogg Foundation believe it all begins with the truth.

The producers of the movie Detroit decided that now was the time for them to share an ugly truth, so we now have an opportunity to learn and turn a corner in my city after 50 years of an undercurrent that has pulled the energy and spirit from people who are trying to get ahead, taking them further and further beneath their potential.

We are in a moment where if we don’t acknowledge the past, and the truths of the past, we will be destined to repeat these horrific incidences over and over. In cities across the country, we are trapped in a vicious cycle and unless we all adopt the same courage and bravery that Mayor Landrieu has displayed in rebuilding the city of New Orleans with an eye towards achieving equity in all communities, we will unfortunately leave a nation to our next generation filled with the same hatred, bigotry and structural racial inequalities. So, tonight, I would like to talk to all of you about a future framed by equality that we can create together.

At the Kellogg Foundation, we believe that change begins at the local level – in communities – and that once the transformation builds from community to community, we can then inspire our country to embrace a truth and equity agenda as well, and provide more opportunities for our children.

I had an opportunity to review your “Leadership for America: Mayors’ Agenda for the Future.”

And, what you have committed to is assuring that the safety and security of communities exist for all, that you can fix the crumbling infrastructure and that you can expand the workforce and create equitable communities that will eventually revitalize the nation.

I support you on that agenda. The Kellogg Foundation supports you and, in partnership, we can build a brighter future for our children, our communities and our cities. We must be driven by what President John F. Kennedy once said, “We will neglect our cities to our peril, for neglecting them we neglect the nation.”

Today, many partnerships and collaborations are taking shape around our country to get to the root causes of many of the issues ailing our cities – it has resulted in resilient and committed people working to create change. We all want cities that work – we want neighborhoods that thrive and residents who have and BELIEVE in their dreams, especially in what their children can become.

However, before this happens, healing needs to take place.

The Kellogg Foundation’s framework for Truth, Racial Healing & Transformation, known as TRHT, can help drive your cities and communities forward. It will support the comprehensive equity agenda that you’ve just created.

The TRHT’s purpose is to improve our ability as communities and as a country to see ourselves in each other, so that we can share a more equitable future with all children, and provide opportunities for them to thrive.

This is essential work because we must bridge the divides in our country.

Now, more than ever, we must all act in big and small ways to help people heal from the effects of racism.

After a year of planning with more than 150 partners, the Kellogg Foundation this summer announced 10 grants, for nearly $24 million, over the next five years, to support diverse, multi-sector coalitions in 14 places that are implementing the foundation’s Truth Racial Healing & Transformation framework. These coalitions have chosen which of the five TRHT framework areas that should be addressed first:

➢The first is Narrative Change, the creating of a more complete and accurate narrative that will help project diverse, positive images of ourselves and each other in our full humanity through all cultural settings and media and entertainment channels, while helping communities understand how false narratives contributed to the embedded racial hierarchy in our society.  For example, civil war monuments erected to honor those who perpetuated slavery and inequality; those stone figures were a brutal slap in the face to the people of color who passed them every day. Narrative change is the courage and boldness to remove those monuments because they are not the narrative of one humanity. I applaud those who have taken bold steps to change that narrative including our mayor of New Orleans, Mayor Landrieu.

➢The second principle is one of Racial Healing and Relationship Building, focusing on ways all of us can heal from the wounds of the past and build mutually respectful relationships across racial and ethnic lines – relationships that honor and value each person’s humanity.

➢The third: Separation, the addressing of segregation, colonization and concentrated poverty in neighborhoods by dismantling and transforming the mix of laws, policies, structures, habits and biases that created and sustain the separation of people by racial categories and the subjugation of cultures, values and languages.

➢Next: the Law, the reviewing of discriminatory civil, criminal and public policies and building support to implement alternatives that will produce a more just application of rules, regulations and the justice system.

➢And finally: the Economy, the examining of barriers to economic opportunities and developing solutions that will create a more equitable society.

This is crucial work. This is your work. If you are to lead the transformation of America, this is your work in every community in America. The children of this country will thank us for helping to propel them to a more equitable future.

In addition to Mayor Landrieu’s work here in New Orleans, I’d like to also recognize other mayors who are also working with the Kellogg Foundation on implementing the TRHT to address issues of equity, truth, and racial healing. Tonight, in this audience, we have Mayor Richard Berry of Albuquerque, Mayor Rahm Emanuel of Chicago, Mayor Mike Rawlings of Dallas, Mayor Karen Weaver of Flint and others who are partnering with us in this quest to bring equity to communities.

We are supporting these communities to lead the way in implementing this truth, racial healing, transformational and sustainable change.

The efforts that these communities are undertaking are pathways to healing and putting a stop to structural racism.

They are supported by not only W.K Kellogg Foundation but other local, regional and national funders, as well, and will sustain this comprehensive, community-designed approach for the long-run. The people in these communities have come together to start the transformational processes that are as diverse as their communities.

I’d like to highlight some of the collaborations that are applying this framework and share some of the excitement of the promise of what is yet to come. Let me share just a few.

The Community Foundation for Greater Buffalo wrote in its proposal that the “fundamental purpose” of their truth, healing and racial healing engagement is to advance a shared agenda that eliminates institutional racism. How powerful is that? They asserted this would be achieved through data-driven, systematic change that would result in transforming their community with a focus on civic, faith, government, education and business sectors.

The Greater Chicago Team wrote that “racial hierarchy is deeply embedded” in their region and that the key quality of life indicators fall along racial lines. But they are confident that their communities can transform, saying they would “build the foundation of people, research, power, healing capacity, and voices…creating a vision for TRHT to flourish.”

And, finally, the Dallas Team adopted a pledge that respects and honors the values of truth, racial healing and transformation. And they committed to the following:

For decades, the W.K. Kellogg Foundation and other philanthropic organizations have been making a difference in our society. The TRHT is just another example of that work. At the Kellogg Foundation, we want to fuel this all across the nation.

It was the transformational leader, Dr. Martin Luther King, Jr., who said, “Philanthropy is commendable, but it must not cause the philanthropist to overlook the circumstances of economic injustice which make philanthropy necessary.”

We are not naïve to believe that money solves all issues, but we do know that, when people come together, this work addressing structural racism, building equity in communities and shaping one humanity can be accomplished. We must succeed.  If we don’t address the root causes of racism, we will endlessly treat only the symptoms of biases and injustice in America.

What public officials, such as the mayors in this room, must do is end business as usual, push aside the governing credo from your predecessors that perpetuated inequality. Those were the master plans that fueled historic disparities in employment, housing, education and health in every community, every city and every state.

Let’s make a fresh start. I stand here tonight to tell you there is a better way, there are better plans. The Mayors’ Agenda can lead the nation forward. Our Truth, Racial Healing & Transformation framework can help create communities where all people regardless of their race, gender or religion are treated equally, have access to quality jobs, housing and education, and can contribute to making our nation a better place for all of us, and most importantly, our children and the next generation.

What I realized watching the movie Detroit is that I have my own healing to do. 50 years later it still hurt. If we don’t heal, we don’t grow. Let’s heal and grow America together. Community by community.