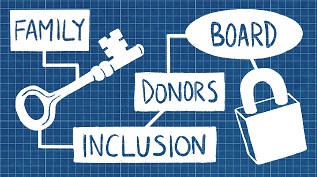 One of the gifts of Quixote Foundation operating within a strategic lifespan? The opportunity for reflection about the field of philanthropy. The insights I have today about the complex and layered power dynamics of philanthropy are different than they were when I was a direct and active participant in those dynamics. In this piece, I explore how the assumptions we make about wealth, race, gender, and family can inhibit our ability to do the work we set out to do, including connecting with others who share our vision of resourcing positive change.

I’m working at home when I receive an email from the Membership Engagement Director of a nationally known philanthropic association. I’ll call them PHIL for short. It’s an invitation for myself and a second Quixote Foundation board member to join their community. At the end of the second sentence, I pause. Then reread it:

“PHIL is continuing to evolve and deepen our focus on racial equity and we’re looking forward to the new CEO bringing passion and focus in this work. There is much to do, and I’m enthusiastic about the direction we’re heading.”

This is great! This mostly white and highly privileged organization is stating explicitly their intent to do serious work around race and inclusion. Not only will this bring about new growth opportunities for their members, board, and staff, but because PHIL funds grant-seekers, hopefully, this renewed dedication to racial equity will also affect their philanthropy, which could potentially affect systemic change beyond them toward a racially just world.

But wait a second. I don’t see the third and final member of the Quixote board included in this invitation. I recheck the recipient email addresses, the salutation,

I go back to the body of the email and read on. No, there’s no mention of June Wilson, Quixote’s African American Executive Director. She’s also our third and final board member in our management triad.

I finish reading the email to make sure PHIL doesn’t mention being in communication with June in some other way. Given she’d participated in a diversity, equity, and inclusion (DEI) training series they offered, it’s possible. Maybe they’ve already asked her to join them in shaping this next stage of their DEI work? Back to the email. No mention of June. I double-check with June to make sure there isn’t a separate invitation to join PHIL in her inbox or junk mail. Nope, there’s nothing.

I scramble for my phone to call the sender of the email—then stop. Calling one individual at one organization isn’t the answer. The problem is bigger than that. Likely, this Membership Engagement Director, in trying to be efficient in their job, missed the opportunity in front of them.

Putting down the phone, I pause again. This, I realized, isn’t only about one person’s assumptions. It also isn’t only about race. It’s about a field that ostensibly funds change in the world, yet often excludes people based on the problematic (and often prejudicial) assumptions of whether or not that person has money to give, controls the money to give, or plays a direct role in those decisions regarding said funders’ control, possession, and/or access to financial resources.

In addition to the racism at play when PHIL invited only the white board members of Quixote to join them, another reason June likely wasn’t included is because, like me, she’s also seen as non-family at Quixote. One of the reasons I’m likely included on the email is simply in hopes that I’ll have influence on the person who most consider to be actual family, the founder’s only child, Erik Hanisch, my husband. This is one of the many funder pecking order distinctions the philanthropic community makes, especially family philanthropy.

To be fair to PHIL’s Membership Engagement Director, these are efficient assumptions made in an attempt to meet their internal recruitment and development goals.

The problem with efficient assumptions, unconscious or conscious, is they often lead to inefficient results. In this instance, for example, PHIL is passing up an opportunity to racially diversify their membership.

For any mostly-white philanthropic organization such as PHIL, it will take deep work to re-imagine their strategies to becoming an entity operating by DEI principles. We did this work internally at Quixote under June’s leadership and we still have a ways to go even as we enter the final stretch of our strategic lifespan. For example, I learned through our DEI training that as a white woman, I often will not intervene in the face of a racial slight occurring at the expense of a person of color in order to avoid saying or doing anything because I might not say or do it well. My fear is that in speaking up I’ll only make it worse. How could I possibly re-imagine a potential DEI intervention that would make something better in the moment, or even in the future? Instead of working through those layers, I default to doing nothing. That’s easier. Efficient. My assumption assures me I can’t re-imagine a successful intervention. DEI work has taught me I must always try.

In PHIL’s example though, an obvious miss happened when it invited the two white people who’d barely ever interacted with their community and passed over inviting the African American who had. It takes slowing down, way down, to change how you go about making up invitation lists that are different than the ones you’ve made before, especially if you are working to train yourself and your organization to be racially equitable and inclusive.

However, it’s difficult to be truly inclusive of all people in the field of organized philanthropy because it’s a system built on exclusivity. You have to be an entity giving money away to be considered a philanthropic organization or in philanthropy; writing checks is our main criteria of inclusion/exclusion. We don’t count volunteering, thought leadership, or goods; we count cash.

I’m guilty of this as well, and need to constantly watch myself so that I don’t fall back into exclusionary assumptions. For example, I’m a member of the Women Donors Network, a community of progressive women philanthropists. I know I could be better at letting potential members know about the chance to join WDN but I often don’t mention it in situations where I’m unsure of the individual’s financial situation. I can also forget to mention WDN and its work when I’m in non-philanthropy spaces where I feel even more unsure about the financial dynamics. I recently found out that I’d offended a nonprofit activist I know because I didn’t introduce her to WDN. When she learned about WDN elsewhere and that I’m a member, she decided I didn’t tell her about it because I didn’t want to include her. I’m glad she’s considering WDN, plus their work around Reflective Democracy is for everyone, but obviously I messed up. Even if it was unintentionally, I excluded someone.

That’s the wrong way to go about inclusion, and as a proud WDN member, it should be easy to work the opportunity to be a part of this community into the majority of my conversations, despite my lurking insecurities about navigating money conversations. I can and will be braver about sharing information and letting potential WDN members make their own decisions about joining. To be more inclusive means slowing down to check my own assumptions, where these assumptions are coming from and doing my own internal work to build up my emotional intelligence on this front.

The root words in philanthropy basically mean: love humans. How can family philanthropy or the larger field change the world for the better if we’re only loving and including the humans that are perceived as potentially able to write checks? We can’t.

The work of becoming inclusive means including staff, more people of color, all family, whether by blood, chosen, or adopted. Let’s put the “I” into DEI. Let’s work as much at the practice of inclusion as the work required for diversity and equity. We can’t assume if we do diversity and equity, inclusion will naturally follow. If we don’t thoughtfully set out to include, we’ll end up excluding, like PHIL and I. We can be an entity/campaign/network/person that invites belonging. The most capable partners don’t sit solely in positions of power. We examine who we haven’t included and make a choice to rectify that.

In order to hone our inclusion skills, let’s give up assumptions. If our objective is to bring resources to organizations (time, treasure, or talent), let’s practice identifying and breaking down places of assumption. Inference is not reality. Let’s apply this to race, gender, giving potential, etc. then experiment with finding more and more places of assumption; then break those assumptions apart. We share this work internally and externally. Rinse. Repeat.

We do the work on all parts of DEI, the work of philanthropy: Love all the humans. It’ll be different. Hard. Heck, extreme introvert that I am, I hardly like being around anyone at all, but if I can give it a whirl, so can you.