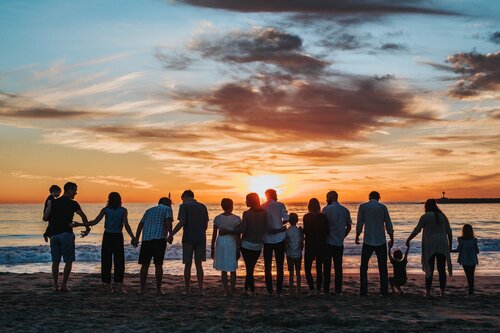 There’s a danger in making generalizations about any group of people, however, this blog post aims to share trends within the “Millennial” or “NextGen” demographic and to offer some tips on how to bridge the generation gap between the old(er) and young around philanthropic giving. This blog is for parents who are looking to incorporate their adult children in a cohesive family philanthropy program and for professional advisors in financial or legal service as well.

Millennials, edging out Baby Boomers as the largest generation by size, are generally defined as between the ages of 23 and 38 in 2019. They have come of age during the Great Recession and are thought to be more circumspect about the ability of government and the economy to work on society’s behalf than Boomers or the earlier “Greatest Generation.”

Also important is their being the first generation to come of age in the era of digital technology and social media. As a result of 24/7 connectivity, their interests span the globe and their relationships, built in person or online, are vitally important to their sense of self. This generation’s need for information and connectivity drives their decision making and has had a profound influence on the charitable sector this past decade. Research shows that as a whole, this generation is passionate, result-oriented, and ready to engage.

Knowing all of this, it’s crucial that if multi-generational philanthropy is to be successful we must know how to connect with each other effectively in order to harness our passion and resources, for this is the only way to make a true impact on the issues that animate us.

If your family has plans to pass wealth onto your adult children, you are far from alone. Some $58-trillion, including $6.3-trillion in charitable bequests, will change hands between 2007 and 2061, according to an updated version of a study by the Boston College Center on Wealth and Philanthropy. By talking with your kids now to explore their philanthropic passions, you are not only preparing the next generation for their coming wealth, you are also deepening your relationship with them around the values and ideals that make your family unique. This is a foundational step in family philanthropy. Incorporating meaningful discussions (beyond the technical details of money) as a part of family gatherings can bind and solidify ties across generations.

The “NextGen” Approach to Philanthropy

Millennials give differently than their parents and grandparents do. There are three ways in which they differ:

1. They are the most likely to choose a charity based on a recommendation from their peer network. Fundraisers, crowdsourcing, and social-media event challenges are examples of the power of Millennials to raise millions using influence campaigns.

2. They want more than glossy photos and vague promises of ‘good work’ done by charities. Instead, they are more focused on data and impact than earlier generations and have strongly influenced the data trend in philanthropy: “Young people want impact they can see, and they want to know that their own involvement has contributed to that impact,” according to the 2012 NextGen Donors Report.

3. They are also more willing to give to those outside their social and economic class. While the older generations typically give to organizations that have a direct impact on their daily lives, NextGen donors are more likely to give outside their sphere of influence (e.g., global giving, race and social justice).

If you’re reading this blog, you are likely more philanthropic than most. Your 20/30-something children may also already have some ideas of their own regarding philanthropy. Get on the same page by reading some of the latest ideas on this generation’s approach to giving, such as Generation Impact: How Next Gen Donors Are Revolutionizing Giving by Sharna Goldseker and Michael Moody. Then, sit down for a conversation about where your values align.

For those who aren’t so keen on philanthropy yet (or just aren’t at the stage in their life to think about it much), remember to take some time to get to know them as unique adults as well as their current interests. By engaging with them about who they are as people beyond your experience of them as small children, you are much more likely to set the stage for more thoughtful conversations as you begin working together.

You can also encourage them to become involved in philanthropy by encouraging them to volunteer or follow a few organizations on social media; you can even offer to make financial contributions in their name to groups that they are developing an interest in. And finally, be sure to let them know that you’re there for them when—and if—they want to talk more about charitable giving.

For those who are ready to think about giving more intentionally, your conversation with them will be a bit different. You might start by asking them questions like:

Are there issues you’re particularly passionate about? How are you involved in these issues right now? Is there a way I can be involved to support your efforts?

Tell me about a charity you donated to in the last couple of years. What attracted you to them?

Are you giving just money to the organizations you care about? Are you also interested in sharing your talents and time as well?

Organizations like the National Center for Family Philanthropy offer excellent opportunities for multi-generational families to network and collaborate with like-minded peers.

Before launching a philanthropic program for your family, you will want to clearly outline your family’s values and general objectives. For many, giving is an emotional response to a particular appeal or an exciting new approach to getting involved in something larger than themselves. There’s nothing wrong with letting your heart guide your charitable wallet, but at the end of the day, a person who gives haphazardly, particularly if they have significant resources, can be left to wonder what their overall charitable impact has been. And as we know, younger generations are especially attuned to assessing impact.