Long accustomed to the excesses of the robber barons of industry, the American public was startled in 1889 when one of the wealthiest men in the nation — and in the world — issued his great manifesto, “The Gospel of Wealth.” Powerfully influenced by his strict Scottish Presbyterian heritage, Andrew Carnegie urged rich people to give their money away, or at least most of it, and to base their philanthropy on their religious faith. 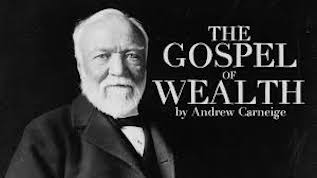 Even by today’s standards, Carnegie’s philanthropy was staggering in size and scope. A son of poor immigrants, Carnegie founded Carnegie Corporation of New York with $135 million in endowment; the Hero funds, $10 million; Carnegie Institute of Technology in Pittsburgh, $11 million; Carnegie Endowment for Peace, $10 million; Carnegie Foundation for the Advancement of Teaching, $15 million; and Carnegie Institution of Washington, $10 million. He spent more than $56 million to build public libraries in more than 2,500 communities across the United States, Canada, Great Britain, and other English-speaking countries. His total lifetime gifts were estimated at $350 million when he died in 1919.   This would be more than $44 billion in 2001 dollars.

Poor and restricted are our opportunities in this life, narrow our horizon, our best work most imperfect; but rich men should be thankful for one inestimable boon. They have it in their power during their lives to busy themselves in organizing benefactions from which the masses of their fellows will derive lasting advantage, and thus dignify their own lives. The highest life is probably to be reached, not by such imitation of the life of Christ as Count Tolstoi give us, but, while animated by Christ’s spirit, by recognizing the changed conditions of this age, and adopting modes of expressing this spirit suitable to the changed conditions under which we live, still laboring for the good of our fellows, which was the essence of his life and teaching, but laboring in a different manner.

This, then is held to be the duty of the man of wealth: To set an example of modest, unostentatious living, shunning display or extravagance; to provide moderately for the legitimate wants of those dependent upon him; and, after doing so, to consider all surplus revenues which come to him simply as trust funds, which he is called upon to administer, and strictly bound as a matter of duty to administer in the manner which, in his judgment, is best calculated to produce the most beneficial results for the community — the man of wealth thus becoming the mere trustee and agent for his poorer brethren, bringing to their service his superior wisdom, experience, and ability to administer, doing for them better than they would or could do for themselves.

We are met here with the difficulty of determining what are moderate sums to leave to members of the family; what is modest, unostentatious living; what is the test of extravagance. There must be different standards for different conditions. The answer is that it is as impossible to name exact amounts or actions as it is to define good manners, good taste, or the rules of propriety; but, nevertheless, these are verities, well known, although indefinable. Public sentiment is quick to know and to feel what offends these. So in the case of wealth. The rule in regard to good taste in dress of men or women applies here. Whatever makes one conspicuous offends the canon. If any family be chiefly known for display, for extravagance in home, table, or equipage, for enormous sums ostentatiously spent in any form upon itself — if these be its chief distinctions we have no difficulty in estimating its nature or culture. So likewise in regard to the use or abuse of its surplus wealth, or to generous freehanded cooperation in good public uses, or to unabated efforts to accumulate and hoard to the last, or whether they administer or bequeath. The verdict rests with the best and most enlightened public sentiment. The community will surely judge, and its judgments will not often be wrong.

The best uses to which surplus wealth can be put have already been indicated. Those who would administer wisely, must, indeed, be wise; for one of the serious obstacles to the improvement of our race is indiscriminate charity. It were better for mankind that the millions of the rich were thrown into the sea than so spent as to encourage the slothful, the drunken, the unworthy. Of every thousand dollars spent in so-called charity today, it is probable that nine hundred and fifty dollars is unwisely spent — so spent, indeed, as to product the very evils which it hopes to mitigate or cure. A well-known writer of philosophic books admitted the other day that he had given a quarter of a dollar to a man who approached him as he was coming to visit the house of his friend. He knew nothing of the habits of this beggar, knew not the use that would be made of this money, although he had every reason to suspect that it would be spent improperly. This man professed to be a disciple of Herbert Spencer; yet the quarter-dollar given that night will probably work more injury than all the money will do good which its thoughtless donor will ever be able to give in true charity. He only gratified his own feelings, saved himself from annoyance — and this was probably one of the most selfish and very worst actions of his life, for in all respects he is most worthy.

In bestowing charity, the main consideration should be to help those who will help themselves; to provide part of the means by which those who desire to improve may do so; to give those who desire to rise the aids by which they may rise; to assist, but rarely or never to do all. Neither the individual nor the race is improved by almsgiving. Those worthy of assistance, except in rare cases, seldom require assistance. The really valuable men of the race never do, except in case of accident or sudden change. Every one has, of course, cases of individuals brought to his own knowledge where temporary assistance can do genuine good, and these he will not overlook. But the amount, which can be wisely given by the individual for individuals, is necessarily limited by his lack of knowledge of the circumstances connected with each. He is the only true reformer who is as careful and as anxious not to aid the unworthy as he is to aid the worthy, and, perhaps, even more so, for in almsgiving more injury is probably done by rewarding vice than by relieving virtue. …. Thus is the problem of rich and poor to be solved. The laws of accumulation will be left free, the laws of distribution free. Individualism will continue, but the millionaire will be but a trustee for the poor, intrusted for a season with a great part of the increased wealth of the community, but administering it for the community far better than it could or would have done for itself. The best minds will thus have reached a stage in the development of the race in which it is clearly seen that there is no mode of disposing of surplus wealth creditable to thoughtful and earnest men into whose hands it flows, save by using it year by year for the general good. This day already dawns. Men may die without incurring the pity of their fellow, still sharers in great business enterprises from which their capital cannot be or has not been withdrawn, and which is left chiefly at death for public uses; yet the day is not far distant when the man who dies leaving behind him millions of available wealth, which was free to him to administer during life, will pass away “unwept, unhonored, and unsung,” no matter to what uses he leaves the dross which he cannot take with him. Of such as these the public verdict will then be: “The man who dies thus rich dies disgraced.”

Such, in my opinion is the true gospel concerning wealth, obedience to which is destined some day to solve the problem of the rich and the poor, and to bring “Peace on earth, among men good will.”