Andrew Carnegie was a Scottish-American industrialist turned philanthropist. In the late 19th century, Carnegie amassed a large fortune in the steel industry. With his resulting millions, which in today’s currency would be the equivalent of billlions of dollars, he became a large scale philanthropist, with an emphasis on local libraries, world peace, education and scientific reseach. He was the author of the 1889 article “The Gospel of Wealth,” in which he called upon his fellow industrialists to share their largesse for the common good. 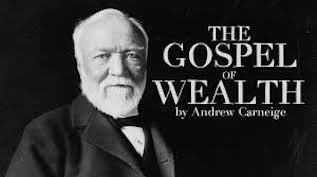 Long accustomed to the excesses of the robber barons of industry, the American public was startled in 1889 when one of the wealthiest men in the nation — and in the world — issued his great manifesto, “The Gospel of Wealth.” Powerfully influenced by his strict Scottish Presbyterian heritage, Andrew Carnegie urged rich people to give their money away, or at least most of it, and to base their philanthropy on their religious faith… Read More