John E. Craig, Jr., M.P.A., served for many years as the executive vice president and chief operating officer of The Commonwealth Fund. In his role, Mr. Craig was responsible for the management of the foundation’s endowment and administration, and also served as the Fund’s treasurer and corporate secretary. In addition to being chairman of the Nonprofit Coordinating Committee of New York City, Mr. Craig has served on the boards of the Greenwall Foundation, the International Women’s Health Coalition, the National Center on Philanthropy and the Law, the TIFF Education Foundation, as well as on the investment committee of the Social Sciences Research Council. He is a founding board member and secretary of Good Causes Support, Inc., an organization formed to create a nonprofit insurance company for New York State nonprofits.

The Archives of U.S. Foundations: An Endangered Species 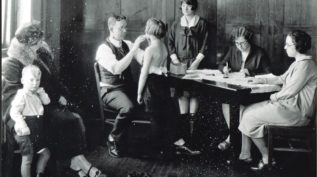 Using data collected on the 300 largest U.S. foundations through a survey commissioned by The Commonwealth Fund in fall 2012, this report discusses the status of archiving in the foundation sector and recommends ways to improve policies and practices in an area that is often overlooked… Read More

Rethinking the Management of Foundation Endowments 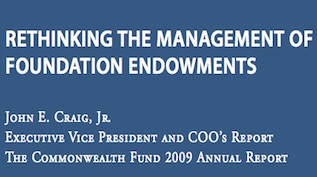 As the implications of the 2008–09 financial crisis for the world economy and markets have become clearer, many foundation executives and investment committees are reassessing their approach to endowment management. This essay reports on the effects of the recent turmoil on foundation endowments thus far, and offers lessons from the crisis and earlier ones that could help boards and investment… Read More

What are the responsibilities of family foundation board members with regards to managing the endowment? This checklist provides a list of key questions to consider when evaluating your endowment management activities… Read More

Seven guidelines for prudent investment committees emerge from this analysis of the determinants of a foundation endowment’s performance: 1. Delegate responsibility for as many investment decisions as possible to professionals. It is unreasonable to expect a part time, voluntary committee to deliver the same level of performance achievable by full-time investment professionals. The economies-of-scale of investment management are such that… Read More