Previously, Peter was Vice President, Philanthropic Services with the California Community Foundation in Los Angeles, CA. Peter joined the California Community Foundation as Gift Planning Officer in 1996, became Director of Gift Planning in 1998 and the foundation’s chief development officer in 2006. During his tenure, the foundation’s assets grew from $200 million to more than $1.3 billion and it received more than $1.2 billion in charitable contributions – in the process becoming one of the nation’s largest community foundations. From 1994 to 1996, Peter was Program Coordinator for Community Foundation Services at the Council on Foundations in Washington, DC. At the Council, Peter managed programs addressing community foundation legal, development, marketing and investment issues, the creation of foundations resulting from the conversion of nonprofit hospitals and the issuance of FASB SFAS 136 affecting nonprofit fund management. He began his nonprofit career as a campaign fundraiser for the United Way of Buffalo and Erie County in 1993. 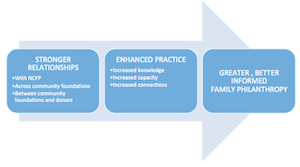 In 2016, NCFP kicks off its second year of the Community Foundations Family Philanthropy Network, a special initiative that aims to enhance the practice and effectiveness of community foundations as strategic partners and trusted advisors to philanthropic families. Join members of the initiative’s Advisory Committee for an open conversation about our progress to date, exciting plans in 2016 to equip… Read More