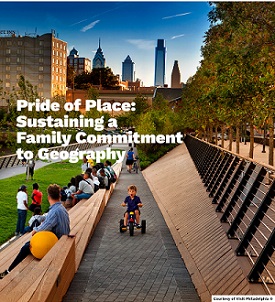 Editor’s note: NCFP is proud to publish Pride of Place: Sustaining a Family Commitment to Geography, a study of place-based foundations and funds. A place-based foundation or fund is committed—often exclusively—to a particular geographic region of the country. Read an excerpt below focusing on the Gund Foundation’s commitment to place, followed by a link to the full report.

The George Gund Foundation’s commitment to Cleveland remains steadfast despite the tremendous changes that have occurred in Northeast Ohio and within the foundation. The economic and social dislocation that accompanied the decline of the region’s industrial economy posed great challenges to the entire population, and the Gund Foundation consistently applied itself to sustaining the city’s assets while also supporting attacks on roots causes of vexing issues. Meanwhile, members of the Gund family followed opportunities and interests to other parts of the country until today no family member lives in Northeast Ohio. Either factor could have splintered both the central purpose of the foundation and diminished committed family participation.

Founded by the president and chairman of the Cleveland Trust Co., then the largest bank in Ohio, the foundation grew out George Gund’s formal program of personal charitable giving that he began in the 1930s. He launched the foundation in 1952, largely with stock that he had acquired in the Kellogg Corporation from the sale of a small coffee company that developed decaffeinated coffee.

From its beginning, the foundation had a strong focus on Cleveland. Foundation Executive Director David Abbott suggests that today the connection takes different forms than one influenced by personal, day-to-day involvement that arises from living in the community, but it is strong nonetheless. The family members know the foundation plays a key role in Cleveland and they know it has great impact in a city the size of Cleveland.

As Board President Geoffrey Gund put it in his annual report reflection in 2012, “The duration and depth of our engagement in Cleveland provides advantages that would not exist with less geographically concentrated grantmaking. Our Trustees and staff members have acquired extensive experience with issues and organizations, and that experience enables us to interact in ways that we hope provide value that goes beyond the amount of the grant check. Management advice, program guidance, convening people around a topic, commissioning research—we use these and other tools to help organizations achieve their missions.”

A central part of that assistance to grantees and to achieving impact is deep support for policy advocacy that both enables and supports the foundation’s work in Cleveland. “Foundations typically speak through their grants, and we can amplify our voice when we support advocates for sensible public policy,” wrote Geoffrey Gund in 2016. “The George Gund Foundation has long supported building a nonprofit voice in public policy deliberations at all levels of government… Democracy benefits from a vigorous nonprofit voice, including from foundations.”

Abbott points out that ongoing learning for board members and staff is a regular process. Board discussions, update calls, guest speakers, and email blasts about issues and current events contribute to that learning. The summer board meeting includes one day for a tour of Cleveland with a particular focus and a variety of guests. In addition, board meetings shifted years ago from dry presentations of grant recommendations to dynamic discussions of current issues. This has generated greater engagement as board members bring their life experiences to the table—from wherever they live.

Two other factors must be considered in looking at the vitality and effectiveness of Gund grantmaking. One is that the foundation’s connection to Cleveland is reinforced by having two Cleveland-based trustees who are not members of the Gund family. They provide extensive local knowledge and experience that augment that of the staff. The Cleveland trustees are eligible to serve two three-year terms. Family members are not term-limited.

Another important factor in Gund’s approach is a culture that emphasizes collaboration with other organizations and sectors in order to leverage the foundation’s human and financial resources. The staff members view their roles as community change agents and they spend a lot of time out of the office working with others. Just one good example is the ongoing transformation of the Cleveland public schools, which is the work of a partnership among local and state government, the business community, other foundations and the schools themselves. Such work, especially with the public sector, reflects Gund’s experience in supporting policy advocacy and its desire to maximize impact.

“We are a bellwether, older industrial area,” Abbott noted. “By taking advantage of Ohio’s role in national politics and policy, we can have an outsize influence. The challenges are enormous. Those challenges helped to give rise to the terribly divisive state of affairs that afflicts our country. Political dynamics, racial dynamics, and other forces make it difficult to act cohesively. But in that unsettled territory the Gund Foundation and philanthropy generally have important roles to play.”

To read the full report, please visit our Knowledge Center.