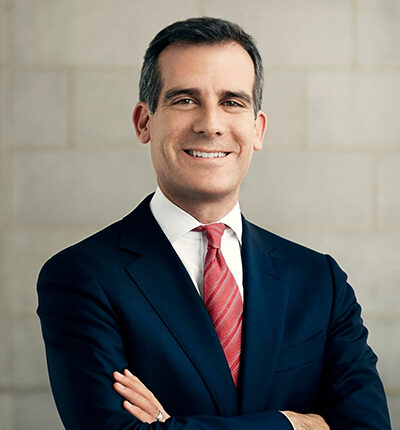 Eric Garcetti is a fourth-generation Angeleno and the 42nd Mayor of Los Angeles. Born and raised in the San Fernando Valley — the son of public servants and the grandson and great-grandson of immigrants from Mexico and Eastern Europe — Mayor Garcetti’s life has been shaped by a deep commitment to the core values of justice, dignity, and equality for all people. These ideals have fueled the Mayor’s relentless drive to fulfill our common obligation: to give children and families of every race, faith, background, and income the chance to get a good education, live on safe streets, earn a decent wage, breathe clean air and drink clean water, receive affordable medical and child care, and build a future of their own choosing.

Angelenos are experiencing the remarkable results of his vision and leadership: the Mayor led and won a campaign to pass the boldest local infrastructure initiative in American history, funding a once-in-a-generation expansion of public transportation. He launched the L.A. College Promise, one of the most ambitious higher education access programs in the nation — serving more than 15,000 students, many of whom are overcoming poverty and are the first in their families to pursue the dream of higher education. He is confronting a homelessness crisis by leading an unprecedented regional alliance committed to getting people off the streets and ending chronic homelessness. He put more money in workers’ pockets by raising the minimum wage to $15 an hour, and cut business taxes to help drive a historic economic recovery that has created a record number of jobs in legacy industries like entertainment and aerospace. And in 2018, he formed a historic partnership with the philanthropic sector to refurbish nearly 350 athletic courts across the city — to support his plan for universal sports and fitness programs that are both free and local for all children in Los Angeles.

The Mayor’s leadership is making an extraordinary impact on the national and international stages: he rallied more than 400 mayors in cities across America to adopt the Paris Climate agreement after the Trump Administration pulled out of the pact. He led the first National Day of
Action on Immigration, and has put unprecedented local resources toward providing Dreamers and others with legal aid to fight deportation. He signed America’s strongest earthquake retrofit law to protect thousands of people’s lives from natural disasters. And he successfully led the bid to bring the 2028 Summer Olympic and Paralympic Games to the United States for the first time in more than 30 years. He has lived and worked in Europe, Asia, and Africa and appointed Los Angeles’ first Deputy Mayor for International Affairs to expand L.A.’s global ties and bring more jobs, economic opportunity, culture, education, and visitors to the city.

While Mayor Garcetti has taken on these enormous challenges, he has also reimagined how city government delivers the most basic services. Since July 2013, L.A. has paved 14,750 lane miles of road; cut the average pothole repair time by half; implemented a $1.4 billion plan to
repair every sidewalk in every community, and greatly expanded the number of trees in neighborhoods across the city. He created Clean Streets L.A. — a block-by-block assessment of 9,100 miles of streets that identifies neighborhoods with the most needs, and prioritizes delivery of resources. Under his leadership, L.A. has been rated the nation’s best-run city by the Bloomberg What Works Cities initiative and become the number-one solar energy city in America.

The Mayor’s government service began on the L.A. City Council, where he spent four terms as Council President before being elected Mayor in 2013 and winning re-election in 2017 by the widest margin in the history of Los Angeles.

Beyond his time at City Hall, Mayor Garcetti has served his country as an intelligence officer in the United States Navy Reserve, and taught at the University of Southern California and Occidental College.

The Mayor received his B.A. and M.A. from Columbia University, and studied as a Rhodes Scholar at Oxford University, and later at the London School of Economics. He is also a jazz pianist and photographer.

He and his wife, First Lady Amy Elaine Wakeland, are the proud parents of a daughter, Maya, and have been foster parents for more than a decade.