Paul Shoemaker formerly served as SVP Seattle’s Executive Connector.  Anyone who’s met him knows why.  If you’re out to change the world, he’s there to connect you to the people and organizations on that same journey.  (He’s also the boss, so he does a little executive directing as well.) Paul is committed to work in the community, serving on the boards of several organizations. He is the Founding President of Social Venture Partners International and currently sits on their Board of Directors, as well as the Board of Partners for Our Children.

Shoemaker is published his first book August 2015, Can’t Not Do, that shares what he’s learned over the last 17 years and provides a roadmap for each of us to find that compelling social drive that can help change the world. Past work includes a term as Board Treasurer of Grantmakers for Effective Organizations (2001-2007), as well as board service for the Microsoft Alumni Foundation (2008-2013) Children’s Alliance in Seattle (1996-2000) and Treepeople in Los Angeles (1987-1990).

Can’t Not Do: The Social Drive That Changes the World 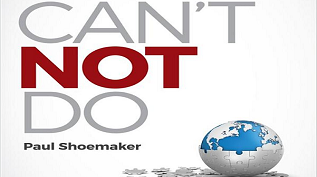 I can’t not do this. It’s not that I can do this, it’s that I can’t not. I don’t have time to not make an impact. I could not imagine not..." I don’t remember the ﬁrst time I heard someone use one of these grammatically incorrect phrases. But I hear these statements consistently, to this day, from educated and literate people. I know you have heard of “can-do” people, they are eager and willing, we admire them and hope our children become like them when they grow up. But the regular heroes you will meet in this book go way beyond can-do, they can’t not do. … Read More

When Is It Time To Say Goodbye?: Exit Strategies And Venture Philanthropy Funds

In the emerging practice of 'venture philanthropy' (VP) (or engaged grant making), one of the most interesting and least understood pillars of the approach is the 'exit strategy.'… Read More