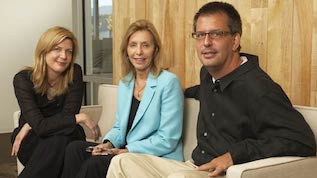 Jacob and Minnie Efroymson moved from Evansville, Indiana to the relatively young state capital of Indianapolis in 1872. The couple opened a small dry goods store on South Meridian Street, unaware they were beginning a family commitment to the city that would last for generations.

Today, the Efroymson family honors its traditional commitment to the city of Indianapolis as it welcomes and helps forge a new philanthropic landscape.

“This is not a flashy, high-profile, self-promoting family,” says Pam Velo, Associate Vice President for Donor Services at the Central Indiana Community Foundation and self-described “chief cook and bottle-washer” to the Efroymson Fund, a donor-advised fund of the foundation. “It’s a very modest, down-to-earth family that truly believes it has an obligation and a responsibility…to give back to the community.”

The history of the Efroymson family and its various funds reveals a group of personalities both dynamic and rooted in family tradition.

“The previous generations were the kind of people who stood up for what they believed and [thought] that they could change things by working hard at it,” says Velo. “The current generation is the same way.”

Jacob and Minnie’s son Gustave, the eldest of their five children, would go on to form his own store at the age of 18 with his brother-in-law, calling it Efroymson and Wolf. When the Indianapolis Foundation was created in 1916, the businessman became its vice-president and a trustee.

Gustave worked quietly on behalf of the disadvantaged. He helped organize Jewish, African-American and Catholic civic leaders in efforts to rid Indianapolis of the Ku Klux Klan in the 1920s. He signed affidavits for Jews fleeing Germany in the 1930s and 1940s, helping them find sanctuary in the United States. Despite the high profile nature of some of his efforts and his position in the community, Gustave much preferred the community’s advancement to his own.

Gustave’s son Robert once recalled being in line at a Loews movie theater. When the theater manager noticed Gustave and his family, he offered to let them go to the front of the line. Gustave, after all, had been instrumental in bringing the franchise to Indianapolis. Gustave thanked him but refused. Robert never forgot the lesson. When Gustave died in 1946, Robert took his place on the Indianapolis Foundation’s board.

While Robert maintained the Efroymson tradition on the board, his brother Clarence was more comfortable behind the scenes. The two made an interesting, dynamic pair—Robert the public face at the Indianapolis Foundation, the United Fund, and the Community Hospital, and Clarence the quiet professor of economics working on behalf of the United Negro College Fund, the Indiana Mental Health Association, and The Nature Conservancy. Together, Robert and Clarence would create The Moriah Fund in 1985, each contributing around $40 million to the cause of improving the quality of life for Jews and non-Jews the world over.

The brothers both passed away in 1988, and Dan Efroymson took his father Robert’s place on the board of the Indianapolis Foundation.

As Indiana took note of the growing popularity of donor-advised funds in the late 1990s, Dan and his wife Lori helped craft a partnership between the Indianapolis Foundation, which served Marion County, and the Legacy Fund, which served Hamilton County. The result was a new regional community foundation: the Central Indiana Community Foundation. Already known for their commitment to Indiana through the Indianapolis Foundation and to the Jewish community and social justice through foundations like the Moriah Fund, the Efroymsons established a new vehicle, the Efroymson Fund, donating $90 million, in the hopes that other donors and families would take on the joys and challenges of philanthropy.

“They wanted other families to know that they could do the same thing even without the money that the Efroymsons have,” says Velo.

To date, the Fund has awarded 277 grants, totaling more than $30 million, to nearly 200 nonprofits.

Even as the giving landscape changes to accommodate new vehicles, new partnerships, and new methods; even as the Efroymsons welcome a new generation to the Fund—Dan and Lori’s children, Jeremy and Elissa; the Efroymson commitment to stewardship remains. Lori Efroymson-Aguilera serves as a board member of the new community foundation.

For the Efroymsons, it’s simple really.

“A person has to be a little useful, don’t you think?” Robert Efroymson once said. “And get a little satisfaction out of feeling you’ve done something useful.”

For more about the Efroymson Fund, visit the web site of the Central Indiana Community Foundation.