To Make a Difference, Family Philanthropy Must Take More Risks

To Make a Difference, Family Philanthropy Must Take More Risks 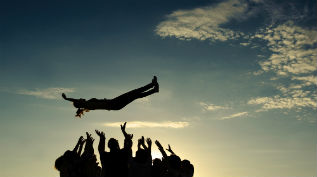 “The point of philanthropy is to try new ideas and be the research-and-development [arm] for the public.”

Imagine a world where every child has access to a quality education. Where humans live in harmony with nature. Where cancer has been cured.

Many of us in family philanthropy are driven by a grand vision of a better world. We are motivated by bold ideas, and finding ways to use our philanthropy to make a difference and leave a lasting impact.

And, at the same time, we are too often hamstrung by a fear of failure. While keenly aware of the hard work that went into earning the money we are giving away, we may feel an obligation to ensuring that the funds are allocated responsibly.

Yet, in philanthropy, we are not always comfortable making those higher-risk investments that have the potential to pay off big.

We are also wary of the reputational risk associated with going out on a limb. Family foundations often bear the name of prominent figures in the community—people are watching what we do, and the public humiliation that comes with failure does not feel worth the risk.

But, in order to solve the world’s most intractable social problems, we must be willing to invest in potentially game-changing ideas. To change the status quo, we have to be willing to take risks.

Philanthropy is trying to address the world’s most entrenched social issues. If it were easy to solve these problems, they would be solved already; but these are big, complex issues, and philanthropic capital is tiny compared to the problems we are up against.

These are high-risk-high-reward propositions, and the only chance we have of creating transformational change is by trying innovative, new ways to change the same, old problems—and there is inherent risk in testing new, big ideas.

There is a place for grant making that addresses problems incrementally—a part of the grant making portfolio that is the equivalent of investing in treasury bills.

But, if we’re going to achieve moonshots like curing cancer, ridding our communities of hunger and poverty, or providing quality education to every child, we also need to have the guts to stray from the tried-and-true and aim higher.

And, philanthropy is uniquely positioned to take important risks to advance social change.

Government cannot take risks with taxpayers’ money. Elected officials are inherently risk-averse—after all, they answer to their constituencies and must stand for reelection.

The private sector is not likely to take risks to address social concerns without a financial return. And, even when it does, it usually has a short time horizon; investors are not patient—they are looking for quarterly returns.

But philanthropy can. In fact, philanthropic capital is the only available capital that can take risk for social good—and the problems we are trying to address are too big to solve without innovation and experimentation. Our resources exist to advance the common good—and they are not tied to anyone’s bottom line or tax bill.

As a result, we can place bets where others won’t, try new approaches that others don’t, and be willing to fail when others can’t.

But, to get there, we have to be willing to put ourselves in uncomfortable positions and be open to criticism. We also need to be prepared to fail—and to fail publicly.

When I was 23, I spent a summer in Oaxaca, Mexico and was struck by the prevalence of nutrition-related health problems. The government programs to address local health issues were mainly focused on supplementation, creating a cycle of increasingly dependent communities. This observation led me to co-found Puente a la Salud Comunitaria (Puente), a nonprofit focused on reintegrating the native, ancient grain amaranth into the diet as a way to address health issues and provide economic opportunities for local communities.

It was a crazy idea—a true longshot. However, if successful, this could prove a new way to solve many of the entrenched and cyclical issues faced by rural Oaxacan communities: poverty and malnutrition.

A few family foundations took a chance on Puente in the early days. They were willing to bet on us, knowing we had nothing but a good idea, passion, and enthusiasm. But, if the idea worked, Puente could help rural Oaxacan communities take control of their lives, increasing their incomes, improving their health, and breaking the cycle of poverty.

Puente is now 13 years old and has impacted the lives of thousands of families in the region. Children are healthier; farmers have an additional source of income; and co-ops are selling their amaranth products throughout the region.

Along the way, people have been skeptical, even critical. There were many days when I thought we might fail. But, thanks to those who supported us and were willing to take a risk on us, Puente has proven a new, innovative way to address very difficult social problems.

Puente is just one small example. More recently we have seen a number of examples of philanthropists and families that have opened themselves up to criticism and taken bold steps that aim to address big problems in new ways.

We’ve seen it in Detroit, where a group of foundations have joined together to pledged some $366 million to help rescue the city’s pension plan.

We’ve also seen it in Silicon Valley, where Mark Zuckerberg and Priscilla Chan have, among other things, invested in testing new efforts at personalized learning.

In both cases, the philanthropies that are working on these projects have been met with criticism and skepticism. While that skepticism is perhaps justified, so, too, are the investments. Philanthropy, after all, should be a place where we can test controversial new approaches.

If we don’t swing hard, we will never hit a home run.