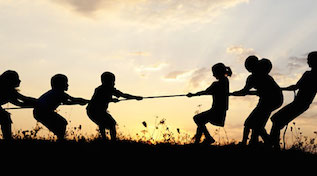 Racial diversity and inclusion have been central to the grant making strategy at the Z. Smith Reynolds Foundation for decades. In more recent years, the Foundation has deepened its engagement with racial equity.

David L. Neal, a family member and trustee at the Winston-Salem, N.C., family foundation, this focus on equity has been a high priority. Not long ago, however, as he was researching his family’s — and the foundation’s — history, he discovered that its legacy is more complicated than he had once thought.

During the early1960s, even as it was fighting poverty and segregation, the foundation wrote grants to Tanglewood, the former estate of foundation co-founder William N. Reynolds, who bequeathed the park to the “white citizens of Forsyth County.” Despite the passage of the Civil Rights Act of 1964, the “whites only” restriction was not fully lifted until the early 1970s.

“I found it fascinating that the foundation gave grants to Tanglewood, even as it helped to launch the North Carolina Fund, which was a very progressive, anti-poverty effort that explicitly worked against segregation,” Neal says.

Times change — as does our understanding of equity.

Because of that, foundations with long histories often find that their past practices are at odds with their current aspirations.

Such is the case for Z. Smith Reynolds. But Neal says that families that are honest and transparent about their past can still play a leading role in advancing racial equity.

The National Center for Family Philanthropy recently spoke with Neal, who presented at the NCFP annual Trustee Education Institute about diversity and equity and how family foundations can help lead important efforts to improve conditions for all people.

Below are excerpts from that conversation:

NCFP: It seems like we’re seeing more foundations getting reengaged in issues around diversity and civil rights. Do you sense that there’s a larger movement happening in the field?

David Neal: I hope so. We’re in a moment of really incredible civil rights advocacy. There’s more visible activism and explicit discourse on these issues — and I imagine a lot of foundations are grappling with it anew.

In that context, what role do you think foundations should be playing in advancing issues of equity and civil rights?

That’s a really good question. A racial equity lens can be adapted to most any effort of a foundation and can help to deepen the foundation’s engagement, whether it is in K-12 education, the arts, or the environment. But my initial thought when it comes to advancing racial equity and civil rights is that we should be supporting different levels of work. We should be supporting activists and organizers who are on the front lines and bringing attention to racial inequality, who are demanding justice and who are articulating a compelling vision for the need to address systemic racial inequality.

There’s also need to support research and policy development. Organizations like the Haas Institute for a Fair and Inclusive Society, the Kirwan Institute for the Study of Race and Ethnicity, Demos, and the Center for Social Inclusion are just a few organizations that have done path-breaking research into dismantling systems that further racial inequality.

There’s a need to support community economic development, particularly efforts lead by communities of color that have developed strategies for building assets within their communities, where there has been a history and continuing wealth gap.

But eradicating gaps doesn’t meaning bringing down anyone else’s achievement. It means asking questions, like: what are the targeted interventions and resources that would allow everybody to excel and meet their full potential?

Having said that, it’s sometimes easy to get stuck thinking about gaps when working on racial justice. It sometimes does a disservice to the vision of where we’re trying to go —a world where there is true opportunity and a real level playing field for everyone, where all people are valued.

I would invite my fellow foundation leaders to continue asking this question and to look for guidance from the people most affected by structural, racial inequality. This also means working on racial diversity and inclusion within the foundation. For family foundations with a white racial background and with restrictions of only allowing family members on the board, there are other ways forward. This could include convening a racially diverse and inclusive community advisory board, or hiring a consultant with expertise in racial equity to help shape the foundation’s work.

How big of an impact can foundations have? What role do you see them playing in terms of getting the right people to the table to deal with these issues in a productive way?

For example, if you have a foundation that works at the city or local level, you might be in an ideal position to bring together city council members, police, community members, and others to grapple with racial disparities in the local criminal justice system. A foundation can be in a great position to help start a dialogue, to bring people together, to be kind of a mutual common ground where people from very different backgrounds to meet across lines of difference in a facilitated way.

What are some things family foundations can be doing to incorporate equity into their work?

If you’re a foundation that works in a specific city or region, it’s important to try to expand your networks to go beyond the traditional elite, to expand it to more of your grassroots partners, people who are engaged in important work at a community level.

I don’t think there’s any simple one-stop shop. It’s using engagement to bridge differences and thinking creatively about who in your community is grappling with these issues.

For families, this issue can sometimes be tricky — especially if through their business practices or their prior grant making, they helped contribute to some of the inequities we face in our society. What are some things families can do to recognize their role in fostering some of the conditions that have created inequities? How can they build trust and ensure that they are addressing these issues in a responsible way moving forward?

I think a lot about how my family’s history is helping to inform what I have at stake and my own feeling of responsibility for the continuing legacy of white supremacy.

As a foundation, we did a deeper dive about a year ago to reflect on where we’ve been and where we’re going with our racial equity work, and I talked about this juxtaposition of our past work and how this work is sometimes uneven and doesn’t always follow a straight line.

One thing foundations and families can do is model truth telling in their own histories and acknowledge that this is where we came from. You can say that ‘we didn’t always take this seriously’ or ‘we used to be on the wrong side of this issue, and this is what we’ve learned.’ You can then move forward and say this is where we want to go — that we want to reflect the idea that everybody should have a full and fair chance at life.

It’s ok to model that kind of vulnerability and truth telling. That’s a real valuable role that foundations can play. I think there’s too little of that in our society. Neither I nor Z. Smith Reynolds pretends to have the answers to these thorny questions. Different foundations will come at this work from very different places, and that is ok. There are lots of great resources for grappling with how to incorporate racial equity into a foundation’s work, including the Philanthropic Initiative for Racial Equity.