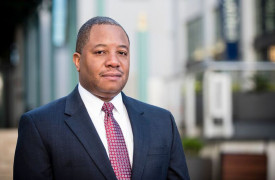 Maurice “Mo” Green brings a unique perspective to his work as leader of one of the South’s largest family foundations. Green has a background in public education and law — working both as a private practice attorney and, later, the superintendent of schools in one of North Carolina’s largest districts. In May 2016, he was hired as executive director of the Z. Smith Reynolds Foundation, an 80-year-old family foundation that has granted more than $550 million.

The National Center for Family Philanthropy recently spoke with Green to learn more about how he has approached his role.

How would you describe your role with the foundation?

I have had the great honor of working alongside Trustees and staff to spearhead the Foundation’s efforts to improve the quality of life for all North Carolinians. I also work with leaders in various sectors to respond to challenges and opportunities, and generate strategies that will advance the future of North Carolina.

How did you prepare for this role?
Prior to coming to the Foundation, I met with the former executive director of the Foundation, Leslie Winner. I also met with various Trustees and members of the staff. Staff prepared a comprehensive set of materials that I thoroughly reviewed. This included, but was not limited to, policies and procedures, several years of meeting minutes, documents related to grantmaking, books written about the Foundation, and a whole host of other materials that would prepare me to come into the Foundation and hit the ground running.

What were some of your top priorities for your first year?

Soon after joining the Foundation, I developed and implemented, with input and support from the Trustees and staff, an entry plan that guided my work for the first several months on the job.

As part of this process, Trustees, staff, ZSR’s Community Leadership Council and I embarked on a statewide listening and learning tour called “Mo Wants To Know,” to hear directly from state leaders, local leaders, and community members about trends and challenges, as well as opportunities, successes, and ideas for making North Carolina a better place.

What has surprised you so far in this role?

Prior to coming to the Foundation, I thought I had a good sense of the Z. Smith Reynolds Foundation and the influence it had across the state; however, it was not until I started working here that I realized the extent to which that influence existed and how important the Foundation is, and has been, to North Carolina.

During our statewide listening and learning tour, I was surprised by a couple of issues that kept emerging as we traveled to various communities. The first being the number of times we heard from employers about the availability of jobs in places, but that there was not enough skilled labor to fill those jobs. The second being the extent of the opioid epidemic across the state.

What were some of your biggest accomplishments from your first year?

I do think the Foundation has had some big accomplishments over the course of the past year. This includes embarking on a successful strategic assessment and planning process that led to an update on our emerging direction in June 2017. As part of the strategic assessment and planning process, we launched and completed a successful statewide listening and learning tour. We met with many individuals, groups and organizations across the state and started, or built upon, a number of relationships that we intend to continue to cultivate.

In March 2017, ZSR established the Darryl Hunt Memorial Scholarship, in the amount of $100,000, to provide scholarships to individuals in Winston-Salem and Forsyth County who have been convicted of a criminal offense, have served a jail or prison sentence, and are seeking higher education. Darryl Hunt, from Winston-Salem, was wrongfully convicted of rape and murder in 1984, at the age of 19 and spent nearly two decades of his life in prison. After his exoneration, he dedicated his life to speaking out against injustice and as a champion for criminal justice reform, the innocence movement and wrongful conviction.

More recently, with the President’s announcement of the termination of the Deferred Action for Childhood Arrivals (DACA), which would rescind work authorization and protection from deportation for nearly 800,000 undocumented young people and would have a direct impact on nearly 27,500 DACA recipients in North Carolina, the Foundation awarded eight “rapid response” grants – through a DACA Rapid Response Fund – to support immigrant-serving and legal service organizations, to provide DACA renewal clinics, community education, and emergency planning services for affected individuals and families through the end of March 2018.

Finally, the Foundation continued its grantmaking during my first year. That grantmaking resulted in positive outcomes for North Carolinians.

What tips do you have for other new executive directors for developing strong relationships with the board and with the family?

In this role, it has been helpful for me to be in constant communication with our Trustees, to share with them the work that staff is doing and to keep them informed, in multiple and varied ways, of what is happening at ZSR. It has also been important for me to recognize the knowledge, skills, relationships, and experience of the Trustees and to use those attributes in ways that would benefit the Foundation.

How have you developed an understanding of and learned to handle family dynamics?

As I mentioned, I have been blessed to become a part of an organization where the family has been so inclusive of non-family members. It has been a great honor for me to get to know each of the family members. I respect and value each of their gifts, skills and talents and utilize them as much as possible to accomplish the goals that the Foundation has set forth.

What has been the best part of your job?

The best of my job has been working with such a talented group of Trustees and staff, but also seeing the breadth and depth of the impact that ZSR has made across North Carolina both present day and historically.

What do you hope to accomplish with the foundation moving forward?

I hope ZSR will successfully implement its emerging direction because doing so will mean that all North Carolinians will benefit.