Why Support for Long-Term Harvey Recovery is So Vital

Why Support for Long-Term Harvey Recovery is So Vital 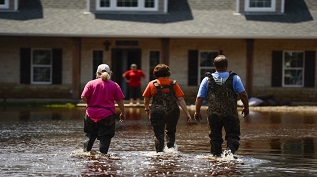 That’s how Houston Mayor Sylvester Turner answered when recently asked about his priorities for this coming week.

And with good reason, with tens of thousands still in emergency temporary shelters and an estimate of hundreds of thousands of houses destroyed or damaged, finding adequate housing will be an enormous challenge.

But that’s not all. The Washington Post estimates that some 500,000 cars have been destroyed, in a region noted for its dependence on automobiles. The Environmental Protection Agency reported Sunday that more than 800 wastewater treatment facilities are not fully operational. The agency has had limited access to most of 13 Superfund sites in the Houston area with toxic materials. Thousands of people in southeast Texas still don’t have safe drinking water. There’s also a serious strain on the education system. More than 200 school districts and charter schools statewide cancelled or delayed classes. It remains unclear when many could fully resume, since ongoing flooding has made it impossible for officials to get a complete assessment of the damage.

When we launched the CDP Hurricane Harvey Recovery Fund we stated from the outset that we would use contributions for mid- and long-term recovery. So does that mean people should ignore rescues and first responder organizations proving immediate relief? Of course not. Contributions to immediate relief are essential and we encourage it.

However, the data we’ve gathered with our partner Foundation Center show that an overwhelming majority of contributions only go to immediate relief. The report, dashboard, and mapping platform – Measuring the State of Disaster Philanthropy – clearly demonstrates the lack of support for strategic long-term recovery and rebuilding. The ideal disaster-giving scenario has donors making contributions before and after disasters – as well as during.

During our webinar last week, FEMA representative Michael Riedy, gave this back-of-the envelope estimate of what happens after a disaster: For every day of immediate relief, there are at least ten days required for mid-term recovery and at least 100 days for long-term recovery. Based on that estimate, people will be recovering from hurricane Harvey for at least three years and probably longer.

That’s why your support for long-term recovery is so vital.