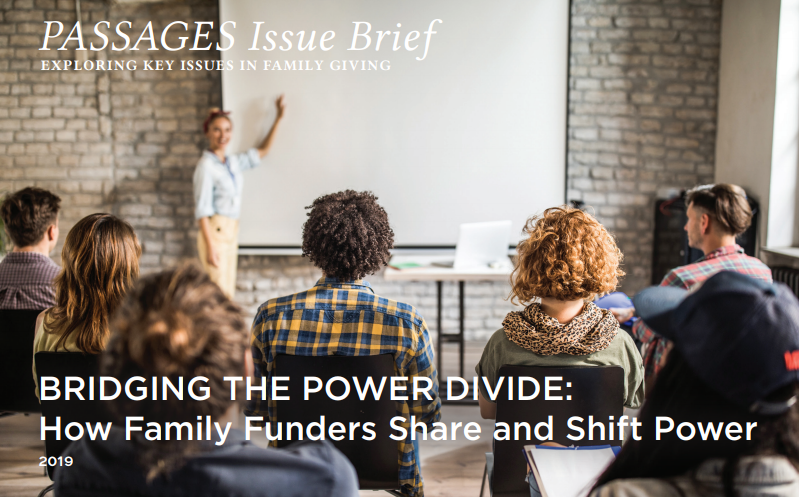 This Passages Issue Brief features stories, perspectives, and practical tips on power, and suggestions for how family funders can work toward bridging the power divide with grantee partners and the communities they care about. Enjoy this excerpt from Bridging the Power Divide: How Family Funders Share and Shift Power, featuring the Masto Foundation.

The Masto Foundation is a family foundation rooted in a community of color. Sparks, executive director and granddaughter of the founder, says her family history and experience with institutional discrimination informs how the foundation approaches equitable giving.

“During World War II, like so many Japanese Americans, my grandparents were sent to an internment camp. My grandfather, Harry Masto, was a farmer, and to escape the camps, was sent to Idaho with other internees to set up a potato farm for the government,” she says. “After the war, he bought the land from the government, set up a potato processing plant in Eastern Washington, and invented a process to dehydrate potatoes. This is how his company became successful, and ultimately, how he had the money to start a foundation in [the] early ‘80s,” she says.

Shortly after Masto established the foundation, he suffered a stroke, which left him without the ability to speak. Sparks’ grandmother, Masie Masto, managed the foundation for the next 30 years but, largely due to a distrust of American legal and financial systems based on her experiences during the war, she didn’t invest or grow the foundation. In 2018, she passed away at age 101, and Sparks, who had been working with other foundations for 15 years to build her skills in philanthropy, became executive director.

To prepare for her role, Sparks traveled to eastern Washington to learn from the people who were recipients of her grandfather’s philanthropy. “I learned that my grandfather practiced community-based philanthropy well before that was a thing, and tried to lead by example. He gave to those who experienced wide-range discrimination and provided his time, leadership, and money to the community.

His approach was to bring people in, to give them opportunities to invest in each other, and leverage that engagement to lift up the entire community,” she says.

Sparks reflects on the many variables that allowed her family to accumulate wealth, when most Japanese Americans had resources taken from them before and during the war. “There’s a huge bias in terms of wealth accumulation in America that privileges white families and white communities. In addition to communities of color having wealth taken from them and not receiving equal compensation for their labor, a long history of structural racism in America has created and perpetuates barriers to accessing legal and financial systems. There are also cultural differences that discourage wealthy families in communities of color from stamping their name on a foundation, much less a building.”

As a self-identified queer person, Sparks reflects on the many challenges that members of the LGBTQ community face in terms of accumulating wealth, and how that impacts the support they receive from philanthropy. She cites data from Funders for LGBTQ Issues: “For every $100 dollars that is granted out in philanthropy, less than 27 cents goes to the LGBTQ community. LGBTQ families weren’t protected or offered the benefits of multi-generational inheritance until marriage became legal just a few years ago. LGBTQ families haven’t set up foundations, and philanthropy hasn’t taken proactive steps to be more inclusive, so the needs of the LGBTQ community are not in line of sight for most family foundations,” she says.

“If philanthropy was built in a system filled with racism, and the current practices and policies in philanthropy are set up to exist in perpetuity—with no incentive for foundations to recognize and address the racial wealth gap or promote equity— it caused me to wonder: does philanthropy have the potential to perpetuate structural racism?” she says.

As one way of addressing this, Sparks founded several giving circles focused on promoting the inclusion of young people, LGBTQ communities, and people of color in philanthropy. She’s now bringing this inclusive approach to her own foundation.

“The lack of racial and cultural diversity in family foundations has led to a lack of variation in how grantmaking is done,” she says. “I’ve learned about philanthropy from an outsiders’ perspective as a queer woman of color. Our family foundation board—my mom, my sister, and I—now have the opportunity to think about how we can do things differently,” she says. “We’re now asking ourselves: How has this limited how philanthropy supports diverse communities? And how can we do our grantmaking to make it more equitable?”

To other family foundations, she offers this advice:

Explore how your family accumulated its wealth.

“The majority of wealth in this country was built on the backs of poor people and people of color. It’s easy to lose sight of that. We in family philanthropy can’t change the amount of wealth we have, or how it came into our families, but it’s our obligation to explore how it did come in, and how our families have benefitted from taxation and legal systems that already favor those who are privileged,” she says.

“Do a real assessment. Look at the dirty realities—the privileges of our ancestors, how the environment was impacted, and the ways you might go on autopilot today in perpetuating an inequitable system.”

“We in philanthropy have created a system where we can take on risk, at the cost of many who haven’t been able to take risks. It’s up to us to actively do something to question the systems we are a part of,” she says. “How can you challenge yourself and your family foundation to do things differently?”