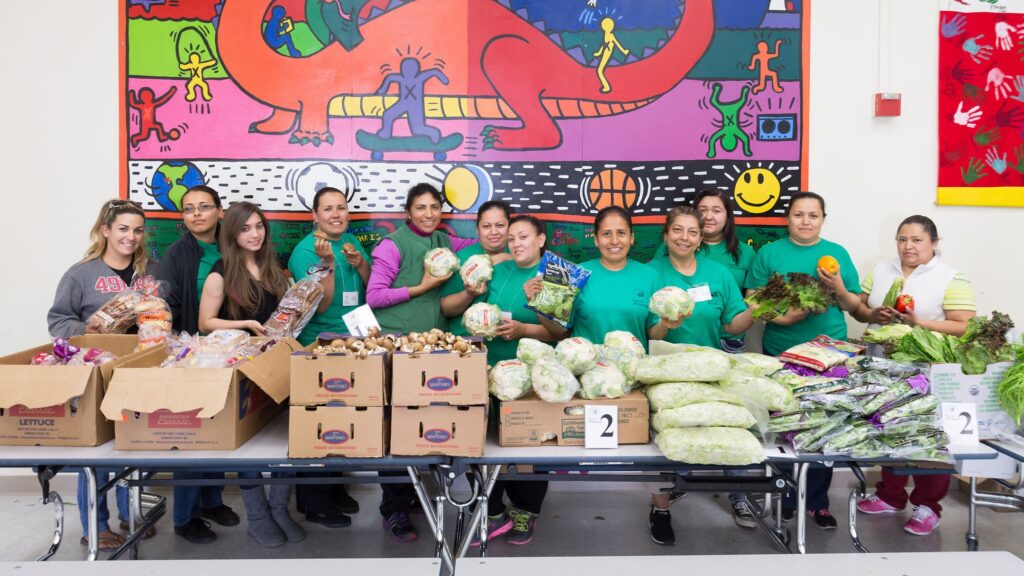 Courtesy of the David and Lucile Packard Foundation

This excerpt from NCFP’s Trends 2020 study shares data and analysis regarding various US family foundation giving trends, including payout rate, influences of giving decisions, discretionary grants, and much more.

Family foundations must make choices around the size, number, and focus of their grants. They also have choices around how much they payout annually, the types of grants they make, and how they interact and communicate with the organizations and individuals they support. This section explores new trends in these and other areas related to foundation giving.

Foundations with a higher payout rate (>8%) are also much less likely to self-identify as issue-focused funders, much more likely to allow discretionary grants by board members, and much more likely to have active founder involvement—perhaps indicating that they have not yet been fully endowed. 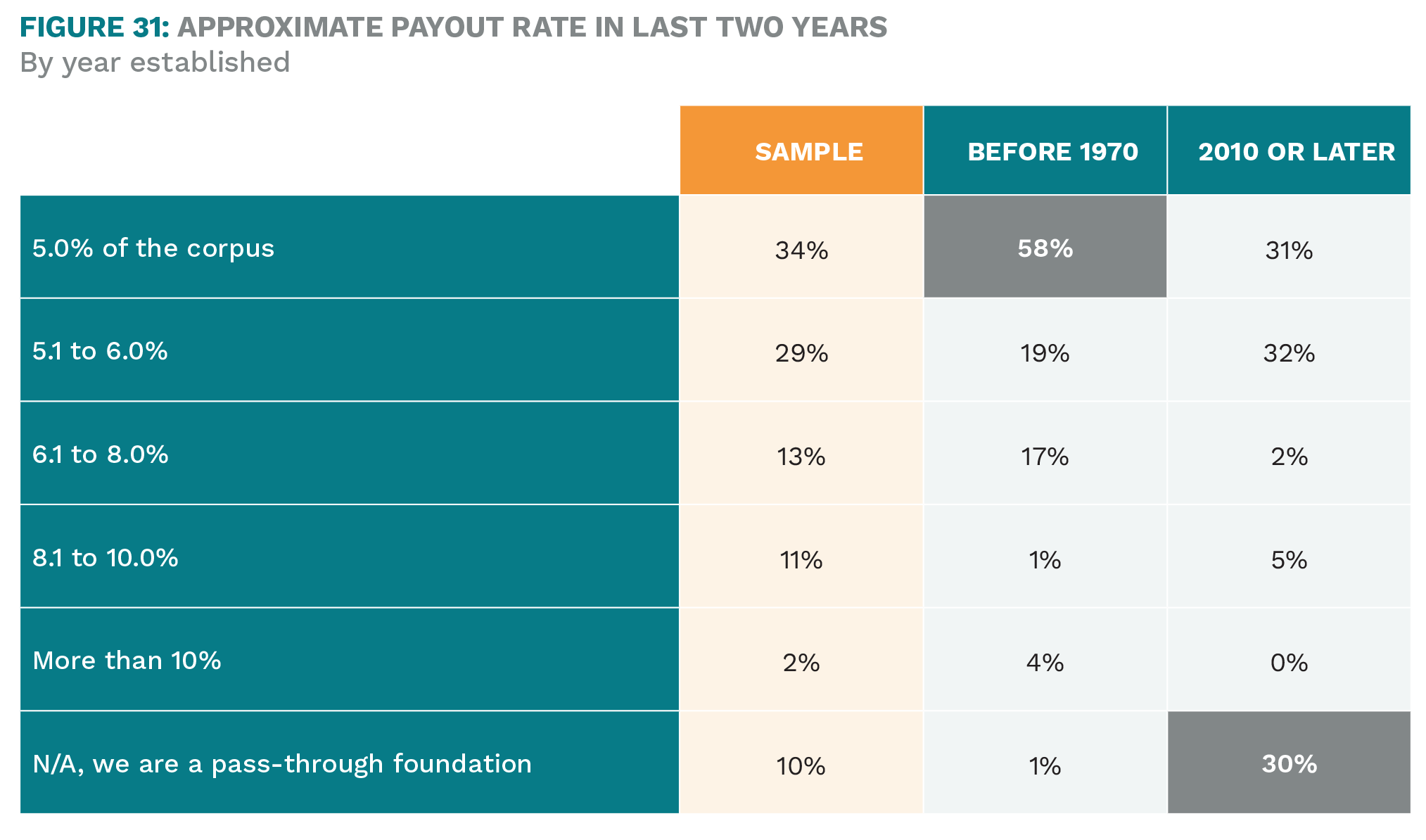 About two-thirds of family foundations make general operating support grants and provide multi-year grants, and about half provide capacity-building grants. In 2015, the majority of foundations chose these same three grant types.

The largest foundations are significantly more likely to provide capacity-building grants (63%), make PRIs (41%), provide loans/grants to guarantee loan funds (33%), and support peer-to-peer nonprofit learning (40%), while foundations under $10M in assets are the most likely to engage in impact investing. While overall 17% operate programs directly, this is much more common among medium to large foundations (25% for foundations with $1M or more in giving, vs. 15% for smaller foundations). 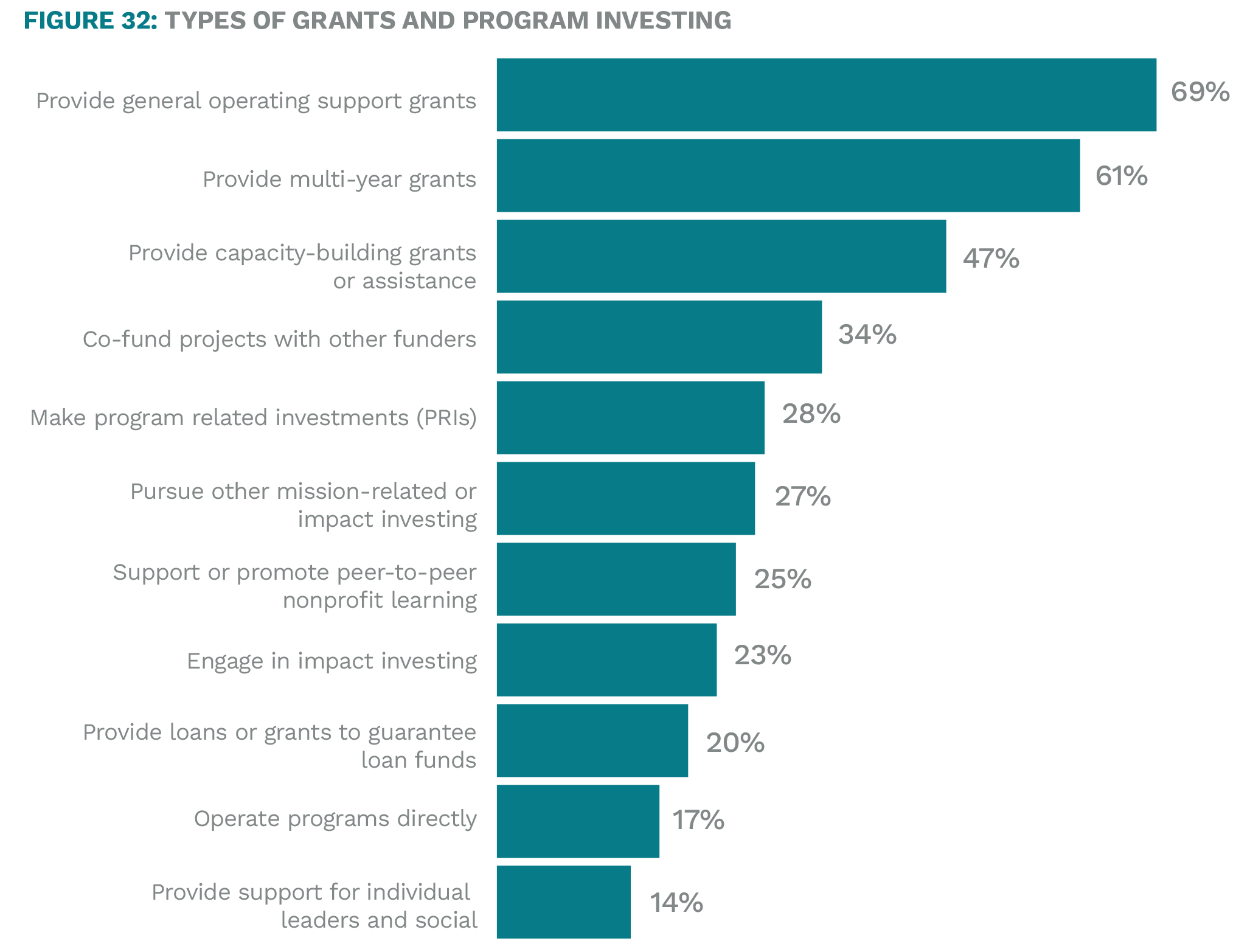 More than one-third of newer foundations say Diversity, Equity, & Inclusion (DEI) considerations have “a lot” of influence on their giving approaches (38%, compared to 11% for all other foundations). 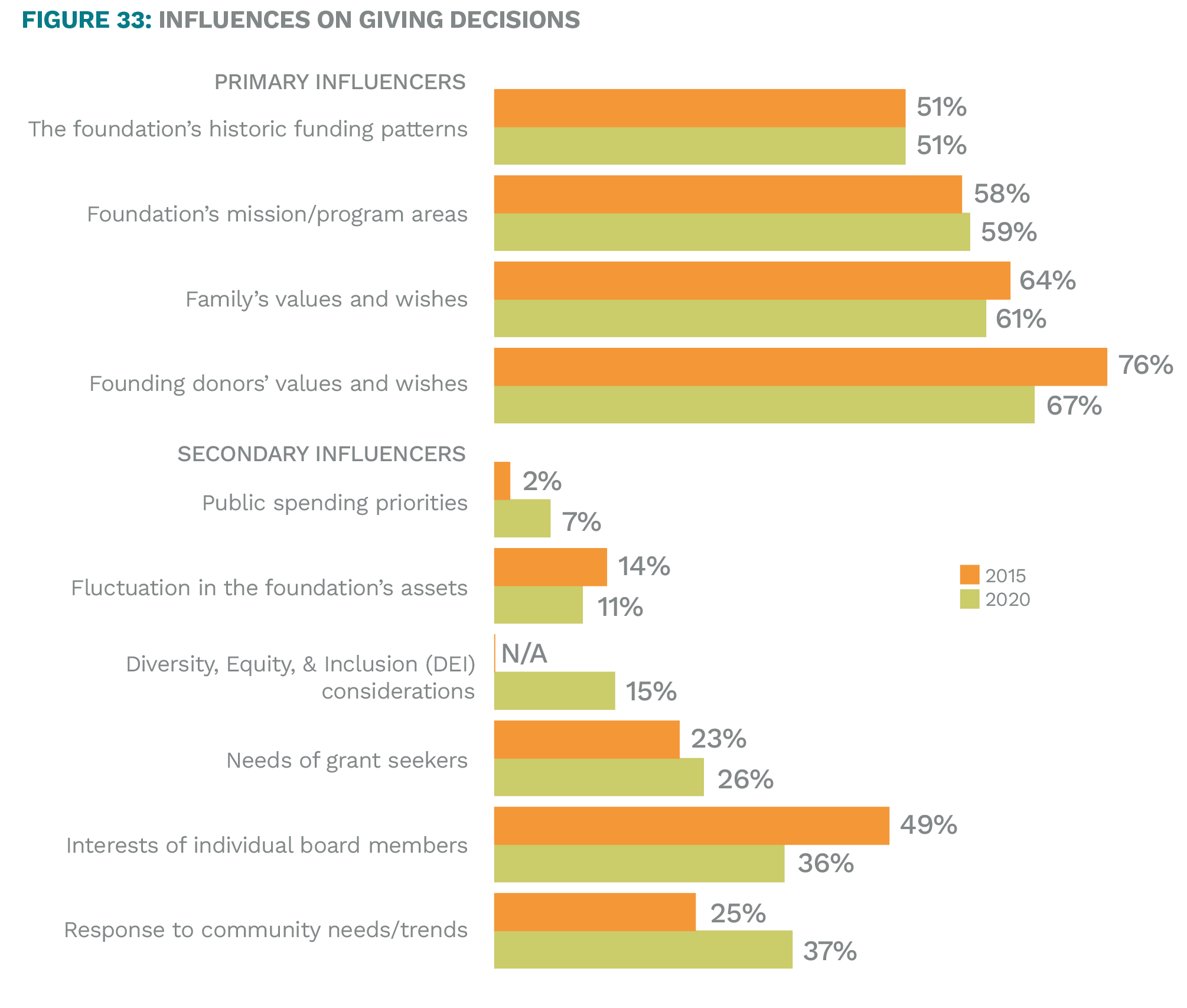 A significantly higher percent of family foundations established in the past 10 years report having guidelines for creating change (80%), social justice (41%), and DEI goals/strategies (53%).

Family foundations are enhancing grants management processes, and in some cases, incorporating additional grant requirements. The majority ask grantees to submit a report detailing how they used grant money, and also to report on outcomes. One-third require grantees to set and measure program goals and targets. 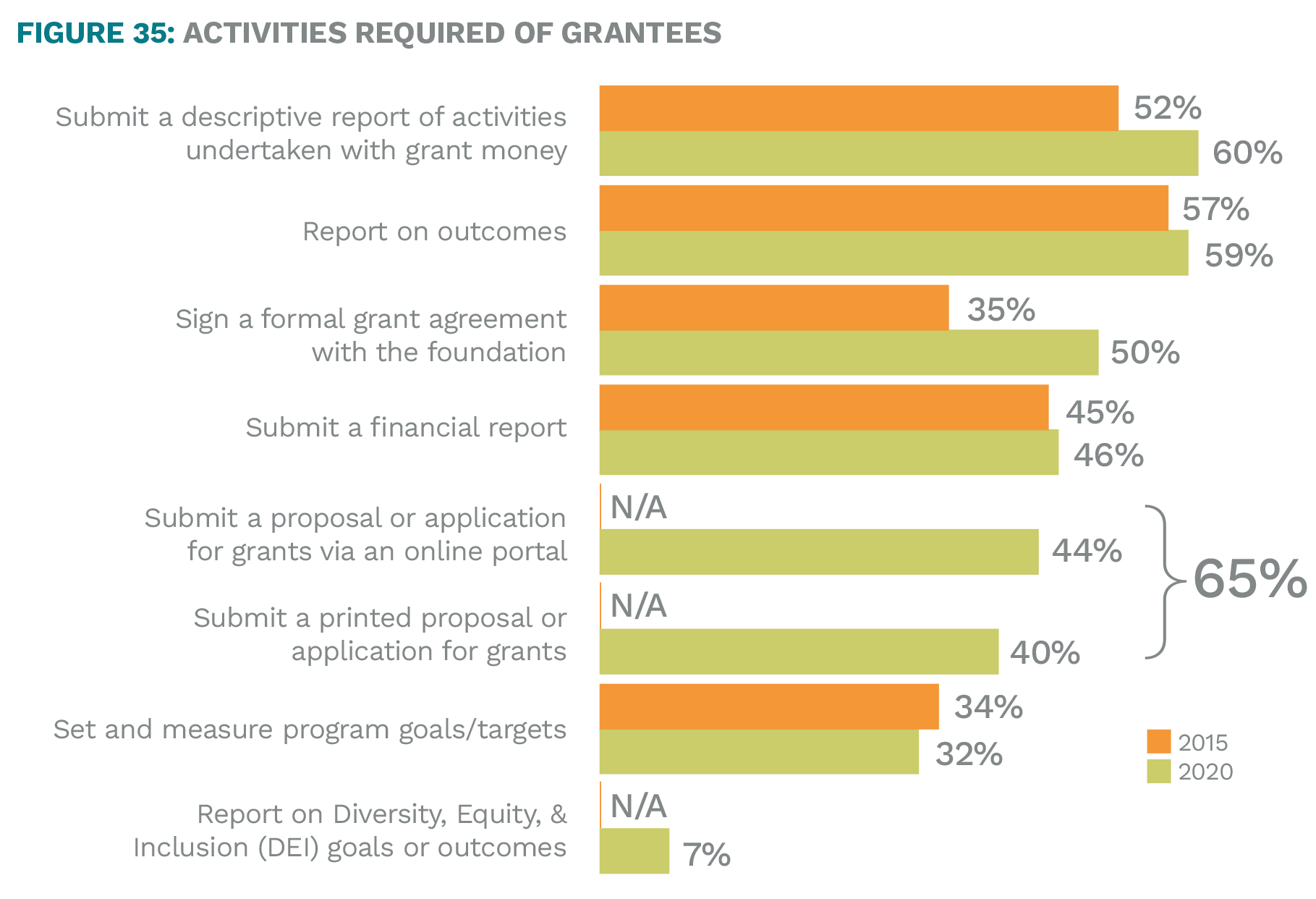 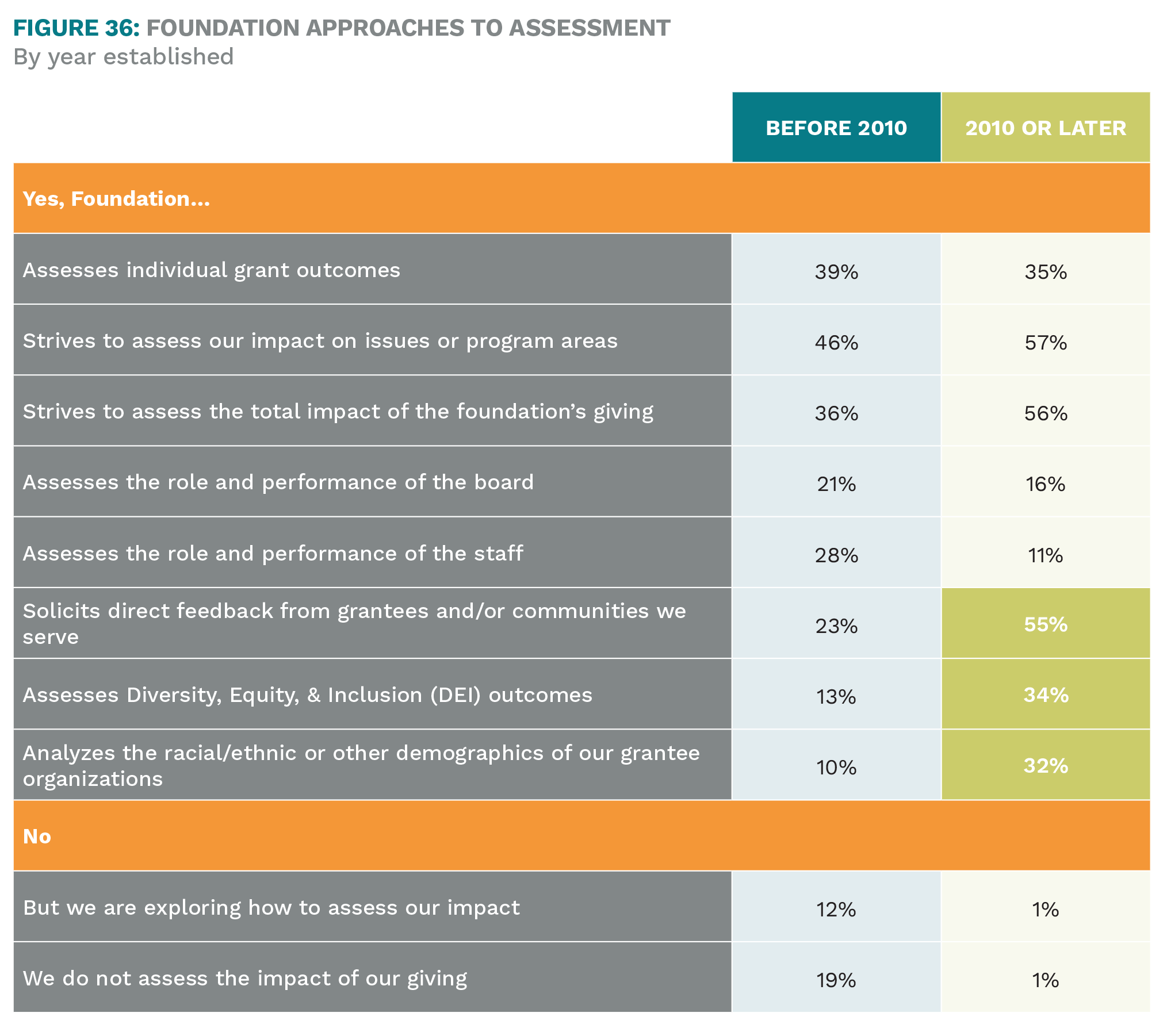 Foundations formed between 1970 and 1989 are also more likely than others to allow discretionary grants (76%).

Two-thirds of current family foundations require that discretionary grants meet the overall foundation mission and/or be within the program area of the foundation. 60% specify that these grants require formal approval by the board (see NOTE).

Families and individual family members give in many ways beyond the family foundation. Most commonly, they give through direct individual support to nonprofits. About one-third have set up one or more donor-advised funds (DAFs) at community foundations, while other types of DAFs, including those offered by financial institutions, are less commonly used.

Family foundations that define themselves as place-based are much more likely to use DAFs, in particular those associated with their local community foundation (58% vs. 26% all other respondents).

Place-based foundations are also more likely to participate in local giving circles (25% vs. 14%).

Overall, use of giving circles remains limited, yet is on the rise since 2015 (from 6% to 18%), as is the use of social venture funds (from 5% to 12%). 14% of family foundations report being connected to one or more other private or operating foundation.

The largest family foundations are notably more likely to use donor-advised funds and family business
contributions. 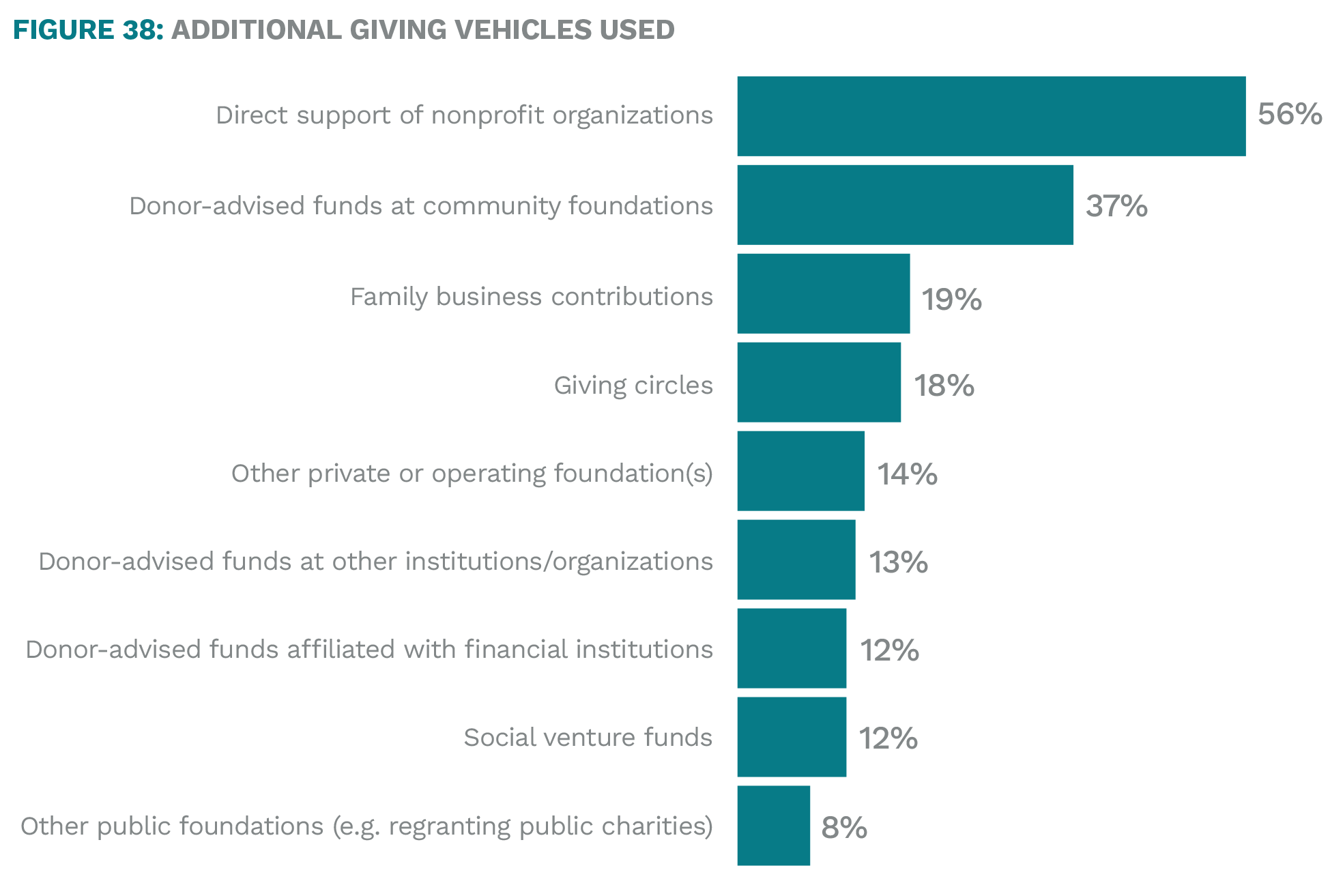