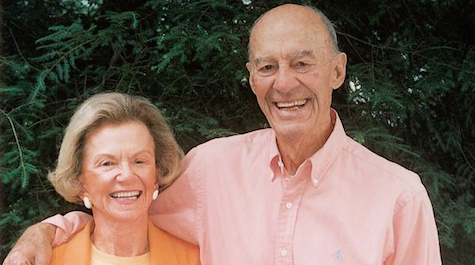 In this month’s issue of Family Giving News, we feature an excerpt from the new  Passages Issue Brief chronicling the experiences of the Eckerd Family Foundation, which operated in Tampa, Florida from 1998 to 2012. Organized from its inception as a limited life foundation, the Eckerd Family Foundation took a bold and strategic approach to using its assets to create significant change on issues affecting young people, including juvenile justice, foster care, and education. The board and staff of the foundation were eager to share their story to assist other families interested in the limited life approach, as well as any funder looking to spend down its assets or be more strategic with its giving.

Jack Eckerd, leader of Eckerd Drug Stores, and his wife Ruth established the Eckerd Family Foundation in June 1998 with clear ideas for what they wanted it to accomplish.

With this third goal in mind, Jack and Ruth instructed the founding board to plan on spending out the foundation within 10 years of his death.

Despite this clear beginning, the Eckerd family faced a variety of important questions in the approximately 15-year lifespan of the foundation. Among them:

This article focuses on the last two of these questions; for additional background, please download the complimentary copy of the new Passages Issue Brief which tells the complete history of the Eckerd Family Foundation and its limited life approach.

Advantages and Disadvantages of the Spend Down Approach

While every giving family is unique and their particular approach to spending-down will yield varying results, there are some aspects of the Eckerd Family Foundation’s experience that are instructive for all families seeking to realize greater impact.

The Eckerd’s approach to grantmaking reflects their founder’s willingness to take risks to achieve ambitious goals, combined with the sense of urgency that accompanies a limited life foundation.

Interviews with the Eckerd family and staff, and analysis of the foundation’s grantmaking strategies, suggest a variety of advantages gained from their spend down approach:

While everyone interviewed reports strong support for the limited life approach, many also acknowledge at least two important disadvantages of this decision:

Sometime in 2014, the Eckerd Family Foundation will officially close its doors, ending more than fifteen years of sustained commitment to young people. The foundation’s legacy will live on for many years to come for a variety of reasons, and in a variety of ways:

Finally, the foundation has served as powerful force for learning and exploration for the family members involved “We learned how to work with family members—how to deal with the baggage and work through it,” says board member Rosemary Lassiter, daughter of the founders. “We learned how to accept differences and understand why people feel that way. These are lessons for life.”

Alternatives to Perpetuity A Conversation Every Foundation Should Have (NCFP, 2005)