Bringing families together: Reflections from the National Forum on Family Philanthropy

Bringing families together: Reflections from the National Forum on Family Philanthropy 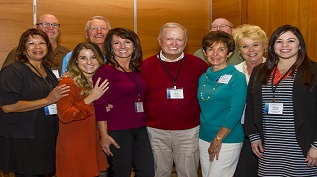 Lisa Parker remembers the first time she met someone like her.

Parker, now the third-generation president of the Lawrence Welk Family Foundation, had grown up in a prominent philanthropic family.

But it wasn’t until middle school — when she learned that one of her classmates was the daughter of a family that ran a California family foundation — that she discovered that she is part of a larger tribe.

“We looked at each other and thought, ‘We’re the same aliens,’” Parker recalled earlier this month from the main stage of the National Forum on Family Philanthropy in Seattle.

Parker spoke a truth that many of the 400 people in attendance at the National Forum on Family Philanthropy knew all too well — that being a family philanthropist can sometimes feel like an alien experience.

But for two-and-a-half action-packed days in Seattle, these leaders didn’t feel like visitors to some foreign land.

Instead, they were part of a much larger family that came together for an event that challenged them with new ideas, answered their questions, and gave them an opportunity to have frank conversations about their unique challenges.

By coming together, these family philanthropy leaders have made new connections and been exposed to new ideas that will help their organizations have a greater impact.

“I am feeling inspired, encouraged, renewed and re-energized about my work,” said Sharmila Thakkar, executive director of the Siragusa Foundation. “I can’t think of any sessions that didn’t leave me with multiple takeaways and lessons learned.”

Thakkar’s sentiments were echoed by many of those we spoke to during and after the Forum.

With that in mind, this post marks the first in an upcoming series that will capture some of the key takeaways and lessons from the 2015 Forum.

In the coming weeks, we’ll explore topics like the importance of effective storytelling, how to engage the next generation of your family, and the challenges created by providing restricted funding to grantees.

These are just a sampling of the topics that we’re going to be discussing in this space. And we hope that you will also take the time to share your ideas and comments, so that we can have a deeper conversation.

Let’s start the conversation by asking a question:

What is the first thing you hope to implement in your family philanthropy practice based on what you learned in Seattle?

We expect that you’ll have a number of highlights to choose from. After all, the Forum provided a number of thought-provoking sessions and ideas. Among the highlights:

We will be digging deeper into these and other topics from the National Forum in the weeks ahead – and we look forward to hearing your ideas and comments!