Hawley Hilton McAuliffe is the granddaughter of Conrad N. Hilton. She has spent her entire adult life as an active community volunteer.

Prior to joining the Conrad N. Hilton Foundation board in 2006, she donated her time to the Archdiocese of New York, Irvington House, New York Lying-In Hospital and Theatreworks USA. At present, she serves as an extraordinary minister of Holy Communion for the elderly at Parsonage Cottage and at St. Roch’s Church in Greenwich, Connecticut.

Hawley and her husband, John, serve as co-chairs for the Order of Malta, Southeast Florida Area. She is responsible for organizing spiritual activities for members, including a monthly outreach program to serve meals to people experiencing homelessness at St. Ann Place.

Her passion for gardening and her love of community are evidenced by her past service on the boards of the Grass River Garden Club in Delray Beach and Hortulus in Greenwich, Connecticut. She is now an Emeritus Judge of the Garden Club of America, having served as a horticulture judge for over ten years.

Like others in the Hilton family, her career led her to the hospitality industry, where she worked in public relations at The Waldorf-Astoria hotel. McAuliffe has studied at Woodbury College, UCLA, and the NYU Heyman Center for Philanthropy and Fundraising.

For nine years, she had been part of the international jury that selects the recipient of the annual Conrad N. Hilton Humanitarian Prize and previously served on the governing board of the Conrad N. Hilton Fund for Sisters.

Hawley is the proud mother of two grown sons and grandmother of one grandson.

Board Chair Peer Network: Reflections on Mission, Vision, and Values with the Hilton Foundation 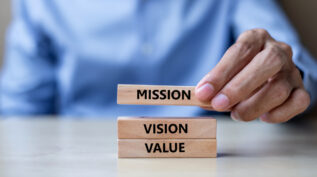 A foundation’s mission, vision, and values, which may be thought of as a statement of purpose, are fundamental in guiding its operations, strategy, and relationship with grantee partners.  For family foundations, these purpose statements are grounded in the family’s history and legacy, and donors’ intent. It is critical that both board and staff understand and are aligned with the mission… Read More