Suzanna Stribling has served as executive director of The Wilbur and Hilda Glenn Family Foundation since 2010. From 2004 –- 2010, she held several positions at the Southeastern Council of Foundations, a regional association of 300+ family, corporate, community and independent foundations from across 11 states.

From 1990 – 1997, Suzanna served as the founding director of the Georgia Center for Nonprofits (formerly the Nonprofit Resource Center). She also served as director of the Atlanta Grantmakers Forum and as publications manager and information specialist for The Development and Technical Assistance Center in New Haven, Connecticut.

Suzanna has served on numerous boards, including the National Council of Nonprofit Associations, the Georgia Society of Association Executives and the Friends School of Atlanta. She was the 1996 chair of National Philanthropy Day in Georgia and is a member of Leadership Atlanta and Leadership Georgia. Suzanna earned the CAE designation (Certified Association Executive) in 2010.

A native Atlantan, Suzanna has a master’s degree from the School of Library and Information Science at the University of North Carolina at Chapel Hill, and graduated from Berry College with a bachelor’s degree in English. She and her husband, Robert G. Rubin, a criminal defense attorney, live in Decatur.

The family foundation life cycle and the role of consultants 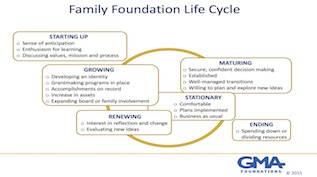 Family foundations come with a unique set of dynamics, like their dedication to preserving a legacy and to sharing decision-making among family members. These dynamics are often a significant influence on a foundation's governance and operations, and they can also extend to how family foundations' experiences with consultants differ from those of other foundations or nonprofits… Read More